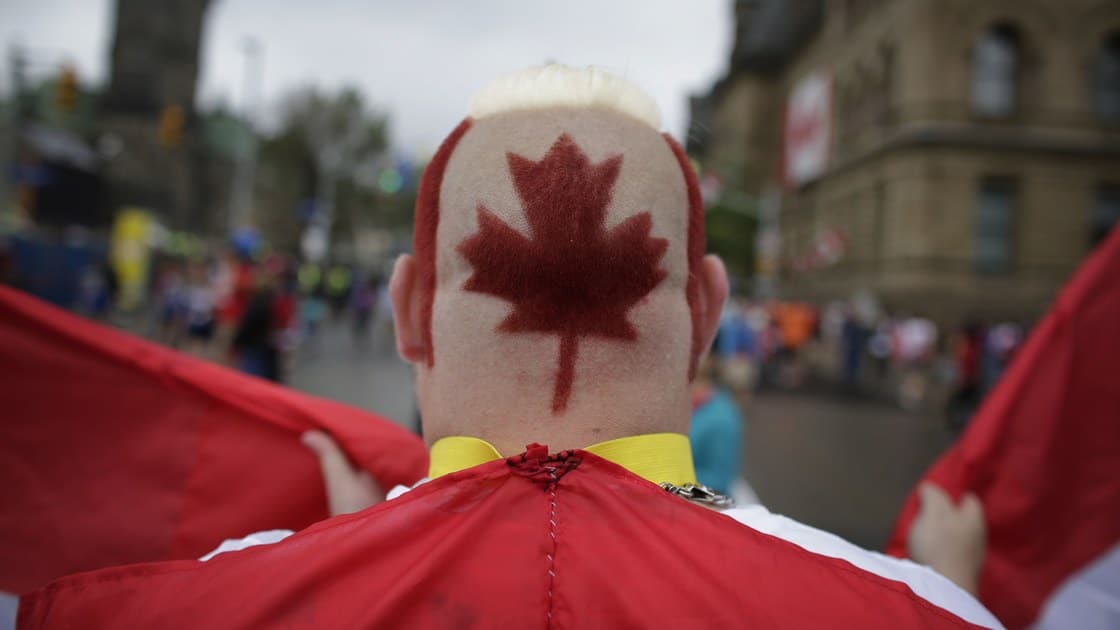 The last Presidential election drove many liberals to muse about packing up and fleeing to Canada. Not many actually did so, but Cori Carl had already made good on the fantasy. She and her wife were committed New Yorkers but felt increasingly disillusioned with the “political backlash after Obama,” she told me. A visit to Toronto charmed them. Jobs fell into place, and they moved, in early 2016, after the momentum of the Trump campaign persuaded them that “we don’t want to stick around for whatever’s going to happen,” Carl said. “The conversation and political tide before the election was enough for us to say, ‘You know what, we can move now.’ ”

Carl has embraced her new home with gusto. She’s been scouring bookstores for Canadian histories and recently embarked on a cross-country road trip; when I contacted her, she was driving to Halifax. There should be no better time for newcomers to learn about Canada than the summer of 2017: July 1st marks the hundred and fiftieth anniversary of Confederation, one of the biggest milestones in Canadian political history. The 1867 agreement, ratified by an act of British Parliament, created the Dominion of Canada and codified the country’s constitution. It marked a crucial step in the slow process of independence from Britain.

Government branders have dubbed the anniversary “Canada 150.” Canadians are celebrating with public art installations, concerts, a multicultural “parade of nations,” international food festivals, and a giant rubber duck scheduled to dock on Lake Ontario. The Canadian clothing company Roots has launched an ad campaign to celebrate “150 years of being nice,” complete with a nationwide search to find “Canada’s nicest person.”

“In the grocery store, the bread I got was in commemorative Canada 150 packaging, and there are a lot of special cookies,” Carl said. But the festivities strike her as “a very surface-level celebration. It’s vague notions of diversity, rather than really getting into Canadian history.”

In some ways, these cheerful tributes to multiculturalism and good manners are just the dose of Canadian civility that American liberals crave. What a relief it must be to live in a country where the head of government spends his time welcoming Syrian refugees and hugging pandas, when our own President is busy trying to ban Muslim immigrants and bullying critics on Twitter.

But this summer of good feelings conceals a complex debate about what the country stands for and what it means to be Canadian. While Americans fight loudly and publicly over the meaning of our history and founding ideals, Canadians—at least the white, English-speaking majority—have learned to avoid the subject. The relative absence of history from Canadian civic discourse is a testament to just how explosive historical debate can be, and a closer look can show Americans how they often misunderstand culture and politics north of the border.

One reason that Canadians aren’t deeply excited about the anniversary of Confederation is that their independence was a long process of orderly negotiation, not a decisive declaration leading to war. July 1, 1867, does not loom in the Canadian imagination the way July 4, 1776, does in Americans’ minds. Decades ago, when the American historian Robin Winks asked a group of Canadian high-school teachers when Canada became independent, they couldn’t agree on the answer. Some offered 1867, when Canada achieved autonomy in domestic matters. But others suggested alternatives, such as 1931, when the Statute of Westminster freed Canada from British command in foreign affairs. In “The Relevance of Canadian History,” Winks wrote:

When people literally do not know when they became independent, their view of the process of governance, of law, and of what is meant by independence is likely to differ from that of those who are certain of the precise moment when they leapt full blown from the head of Zeus.

Americans declare and assume that they are right; Canadians listen, wait, and compromise. Carl encountered this cliché firsthand when other industry professionals in Toronto (she works in digital marketing and communications) politely asked her to soften the self-promoting style she had learned in New York. “In New York, I was never perceived as aggressive. I was constantly told to speak up for myself. In Toronto, I’ve really had to tone it down,” she said. In this case, national stereotypes are rooted in political history.

At the University of North Carolina, where I teach, I smuggle as much Canadian history as possible into my U.S.-history courses. There is no better way to push students to question aspects of our culture that they take for granted, such as the American tendency to fetishize the Constitution as holy scripture and venerate the Founding Fathers as saints. Both attitudes baffle Canadians, who, like the British, understand their constitution as an evolving set of documents and are not inclined to spend summer vacations touring the homesteads of former Prime Ministers.

Of course, the story of Confederation is largely a story of white men who mostly spoke English. This summer, the few Canadians who are eager to talk about history and reëxamine the details of their constitution are those who feel excluded from the standard narrative of Canadian unity and progress: indigenous people and Francophone Québécois.

Indigenous activists have dismissed Canada’s openness to refugees and reputation for “being nice” as a moral sham that diverts attention from native communities, many of which suffer from disproportionate rates of poverty, drug addition, and suicide. “The Canadian concept of inclusiveness is exclusive of First Nations people and is a threat to us,” wrote Robert Jago, a member of the Nooksack Tribe who lives in Quebec.

In 2015, the Truth and Reconciliation Commission of Canada made public, in brutal detail, the testimonies of survivors of Canadian residential schools, which wrenched generations of indigenous children from their families in order to “civilize” them. The last schools closed in the late nineties. (It’s worth noting that the United States, despite a far more murderous record of misconduct toward native populations and people of color, has never initiated a similar commission.) Marie Wilson, one of three commissioners who led the T.R.C., called the Canada 150 celebration “uneven.” “There are those who are cheerleaders for it, some who are in senior levels of government whose job it is to applaud themselves and their institutions,” she told me. But, among indigenous Canadians, “we’ve seen a lot of pushback saying, ‘It’s not our celebration, all it marks is the importing of laws and policies that diminished us and marginalized us.’ ”

Meanwhile, the premier of Quebec, Philippe Couillard, has called for reopening constitutional negotiations to address his province’s long-standing demand for more privileges and greater recognition of its “distinct society.” One of the many oddities of the Canadian political system is that Quebec never signed on to the most recent version of Canada’s constitution—yet the country has not fallen apart.

Canada often works better in practice than in theory. This may be why the majority of Canadians are not interested in discussing political principles or questioning the mainstream consensus on difficult issues. In Canadian intellectual life, certain unspoken rules govern what can and cannot be said in any conversation about the struggles of indigenous communities. Periodically, a rash of teen suicides on a remote northern reserve provokes a round of hand-wringing, but little action. First Nations’ commitments to their traditions and ancestral lands run aground on the realities of life in many of these isolated communities, where there are few economic opportunities and basic groceries arrive infrequently by plane. But, last year, when former Prime Minister Jean Chrétien suggested that some people on one reserve might consider relocating, he was denounced as a defender of colonialism and oppression.

When it comes to Quebec, most Canadians think that it’s best not to poke that hornet’s nest. Americans may consider Canada a paragon of boring stability, but the truth is that the unity of French and English Canada has always been tenuous, held together by a series of fragile compromises and occasionally threatened by violence. In 1970, the Front de Libération du Québec, a separatist terrorist group, kidnapped two officials and murdered one of them, compelling the provincial government to ask the Prime Minister at the time—Pierre Trudeau, Justin Trudeau’s father—to send in troops and empower the Mounties to arrest people without a warrant.

The incident, known as the October Crisis, discredited the violent wing of the separatist movement. But twice in later years—in 1980 and 1995—citizens of Quebec called a referendum on the question of seceding from Canada and came close to voting for independence.

Since then, the separatist movement has weakened. “The crisis lasted from 1970 to 1995, and now we’re in the recovery stage,” said Robert Bothwell, a historian at the University of Toronto. He applauded Justin Trudeau’s refusal to reopen constitutional debate. Such debate is usually a “huge mistake,” he said. “Once you take something down to the realm of first principles, you’re shaking the foundations of society. You’re forcing people to ask and answer difficult questions.”

Such questions are sometimes impossible to avoid, especially as Canada continues to absorb large numbers of immigrants from vastly different cultures. Recently, debates over Muslim students’ right to pray in public school in one Toronto suburb have exposed the limits of secular liberal tolerance. “We have rapidly growing multicultural communities, and time will tell whether our openheartedness gets tested,” said Marie Wilson.

But, most of the time, the Canadian practice of avoiding touchy questions and muddling along seems to work. “Coming to Canada was, for me, truly a promised land,” said Wendell Adjetey, a Ghanaian immigrant who arrived in Canada as a child and is now a Ph.D. student in North American history at Yale. While racism persists in Canada, and “multiculturalism can only take us so far,” the nation remains a beacon of democracy and opportunity. “I would much rather be a poor, racialized person in Canadian society than anywhere else,” he told me.

Canada 150, then, is a subdued celebration in a noble Canadian tradition: one that avoids ideological confrontation and seeks not perfection but peaceful coexistence. I’m not sure that Americans have that option—at least not in Donald Trump’s America. But on this July 1st, we owe it to our neighbors—and to ourselves—to recognize that there is more than one way to be a North American.