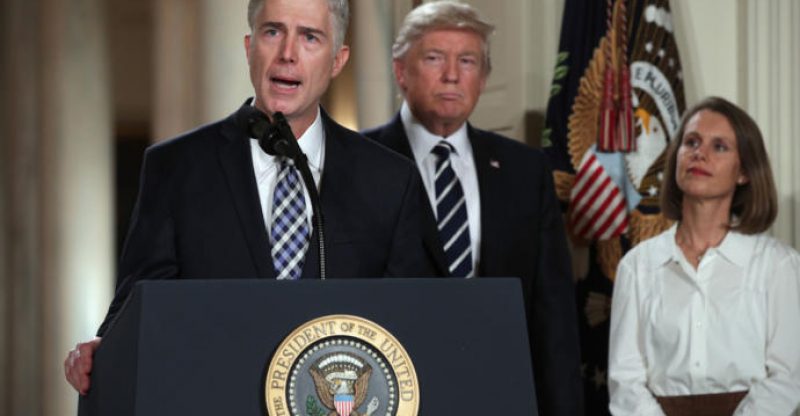 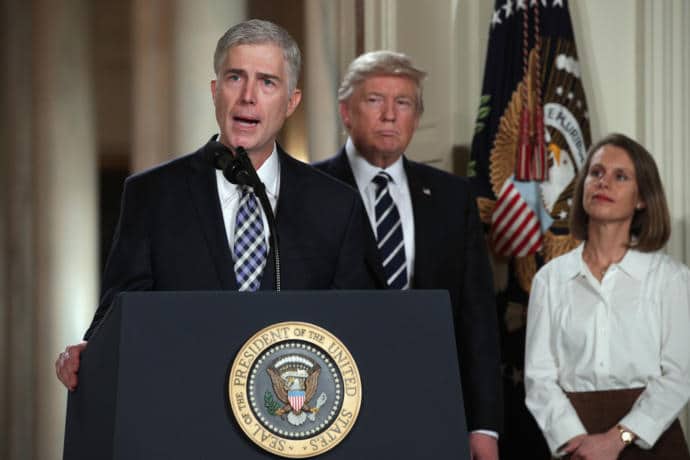 For Democrats, a losing battle over Neil Gorsuch’s nomination to the Supreme Court may be worth waging, if it encourages the liberal base and causes lasting damage to Republicans.CreditPHOTOGRAPH BY ALEX WONG / GETTY

Chuck Schumer, the Senate Minority Leader, has his critics, but he is seldom accused of not knowing which way the wind is blowing. After making some early noises about coöperating with Donald Trump, and then voting for some of the new President’s Cabinet nominees, the sixty-six-year-old Democrat encountered a barrage of criticism from his Party’s supporters. On Tuesday, hundreds of demonstrators marched near his Brooklyn home and chanted, “Chuck! Chuck! Don’t sell us out! We need a fighter to knock Trump out!”

Apparently, Schumer got the message. That night, a few minutes after Trump announced that he was nominating Neil Gorsuch, a conservative judge from Colorado, to replace Antonin Scalia on the Supreme Court, Schumer said on Twitter, “Now more than ever, we need a Justice who is independent, eschews ideology, who will preserve our democracy & protect fundamental rights.” Schumer went on, “Gorsuch put corps over workers, been hostile toward women’s rights & been an ideolog. Skeptical that he can be a strong, independent Justice.”

Schumer didn’t say whether he and his colleagues would attempt to filibuster Gorsuch’s nomination, which would slow things down and, under current rules, require the Republicans to get sixty votes to break the logjam. But on Wednesday Schumer took to Twitter again and wrote, “There will be 60 votes for SCOTUS confirmation. This is nothing new. It was a bar met by each of President Obama’s nominees.”

With that, the Democratic Party embarked on a fight that many of its members and supporters are eager to have. Memories of how the Republicans last year blocked the nomination of Judge Merrick Garland, who was President Obama’s pick to replace Scalia, are still fresh, of course. And Trump’s illiberal actions during his first two weeks in office, particularly his anti-Muslim travel ban, have inflamed passions in all wings of the opposition party.

“The Democrats should treat Trump’s SCOTUS pick with the exact same courtesy the GOP showed Merrick Garland. Don’t flinch, don’t back down,” Dan Pfeiffer, a former senior adviser to Obama, tweeted Tuesday night. Ilya Sheyman, the executive director of the liberal group Moveon.org, said that,until the White House repeals the Muslim ban, “we cannot even begin to discuss the merits of Trump’s nominee.” And Michael Moore, the documentary filmmaker and activist, tweeted, “Senate Dems, let’s be very clear: You will filibuster & block this SC nom or we will find a true progressive and primary u in next election.”

Schumer and his colleagues know that they have little prospect of putting a permanent halt to Gorsuch’s nomination. If the Republican majority, which has fifty-two seats in the Senate, is willing to do away with tradition, it can strip the Democrats of the ability to filibuster Supreme Court nominees with a vote that requires just fifty-one votes, a simple majority. Mitch McConnell, the Senate Majority leader, hasn’t said yet whether he would exercise this power—the so-called nuclear option—if Gorsuch’s nomination gets bogged down. But on Wednesday Trump publicly encouraged McConnell to do this, saying, “It’s up to Mitch, but I would say go for it.”

Despite this threat from Trump, senior Democrats are determined to make the moral case for fighting fire with fire. “The most fundamental thing that must be understood about tonight’s announcement is that this is a stolen seat,” Jeff Merkley, the liberal senator from Oregon, said in a statement on Tuesday. “This is the first time in American history that one party has blockaded a nominee for almost a year in order to deliver a seat to a President of their own party. If this tactic is rewarded rather than resisted, it will set a dangerous new precedent in American governance.”

While Merkley concentrated on the larger picture, his frequent ally Senator Elizabeth Warren, of Massachusetts, took Gorsuch and his record to task. “As a judge, he has twisted himself into a pretzel to make sure the rules favor giant companies over workers and individual Americans,” Warren said in a statement. “He has sided with employers who deny wages, improperly fire workers, or retaliate against whistleblowers for misconduct. He has ruled against workers in all manner of discrimination cases. And he has demonstrated hostility toward women’s access to basic health care.” Warren’s statement went on, “We don’t need another justice who spends his time looking out for those with money and influence.”

With these fighting words, the Democrats went merrily into a battle that will please the Party’s base, but which also carries some risks, one of which is that some moderate Democratic senators may refuse to follow the hard line that Schumer is advocating. “I’m not going to do to President Trump’s nominee what the Republicans in the Senate did to President Obama’s,” Delaware’s Chris Coons said Wednesday. Ten Democratic senators—Coons isn’t one of them—face 2018 reëlection races in states that Trump carried, which could well affect their attitude toward Gorsuch. “Let’s give the man a chance,” West Virginia’s Joe Manchin, whose seat Republicans will certainly target in the midterms, said on “Morning Joe.” “Talk to him. My goodness, don’t shut it down before we even get started. Two wrongs don’t make a right.”

Another danger for Democrats is that Gorsuch could come across as less extreme than he is being depicted. Clearly, he is very conservative—a judge who adheres to Scalian constructionism and Chicago School economics. As Schumer and Warren indicated, he has frequently ruled in favor of businesses. He has also sided with efforts to defund Planned Parenthood, and with religious groups that objected to being obliged to include contraceptive coverage in their employees’ health-care coverage. According to an analysis cited by the Times, Gorsuch is even more conservative than Scalia, although not quite as out there as Clarence Thomas.

For all this, though, Gorsuch isn’t a right-wing flamethrower like Robert Bork. He holds a doctorate in legal philosophy from Oxford University, and has a reputation as a highly intelligent, learned, and careful jurist. Laurence Tribe, the liberal Harvard Law School professor, described Gorsuch on Wednesday as “a brilliant, terrific guy who would do the Court’s work with distinction.” How are Democrats going to persuade people that opposing such a figure isn’t merely obstructionism, which will be the White House’s claim?

They could follow Merkley’s lead—bringing up Garland and arguing that Gorsuch’s nomination is part of a broader effort by Trump and his Republican allies to grab power by tearing up previously accepted norms. That argument has the virtue of being true. Politically, though, it isn’t a surefire winner. Republicans will accuse Democrats of never giving Gorsuch a chance. Democrats will say that the Republicans did the same thing to Garland. And many Americans who don’t follow politics closely may dismiss the whole thing as another partisan dispute.

That would be disheartening indeed, because the most effective resistance to Trump’s incipient authoritarianism goes beyond partisanship. The impressive response to the travel ban demonstrated this: it drew in leftists, Democrats, independents, libertarians, and even some dissident Republicans. In the past week, we saw the makings of a cross-party alliance that could conceivably place some restraints on Trump’s behavior. Ordinary citizens, civil-rights groups, federal judges, government officials, and elected politicians all challenged his actions. And the pressure had a demonstrable effect: the White House modified the travel ban, saying it didn’t apply to green-card holders.

Absent some very damaging revelations about Gorsuch during his confirmation hearings, it is hard to see how a similar alliance could be constructed to halt his nomination. Republicans and conservative pressure groups are already uniting behind him. And the prospect of Gorsuch replacing Scalia is unlikely to spark resignations by senior federal officials or expressions of outrage from around the world.  The Democrats and their supporters will be largely on their own, and with McConnell holding the option to exercise the nuclear option the outcome will be pretty much predetermined: Gorsuch will eventually take a seat on the Court.

Of course, losing battles are sometimes worth waging, especially if they encourage your side and cause lasting damage to the enemy. (In military warfare, the classic example is Stalingrad, in which the embattled Russians inflicted huge casualties and losses of materiel on the Germans and their allies.) The key questions here are: What do the anti-Trump forces stand to stand to gain in a lengthy filibuster battle that ends with Gorsuch being confirmed, and what do Trump and the Republicans stand to lose?

One argument, which the Washington Post’s Greg Sargent put forward on Wednesday, and which I find persuasive, is that the Democrats “can use the nomination fight to shine a light on Trump’s authoritarian tendencies and serial undermining of our democratic norms.” Besides delving into Gorsuch’s record on issues such as environmental protection and women’s rights, Sargent suggested, his Democratic interlocutors should force him to answer questions related directly to some of the objectionable things Trump and his Administration have done in their first few weeks. “I would ask him what the court’s proper reaction would be if a president refused to comply with an order from his court or a lower court,” Elizabeth Wydra, the president of the Constitutional Accountability Center, told Sargent. “I would ask Gorsuch what he thinks about the scope of the emoluments clause—to whom does he think it applies, and in what context?”

Another thing to consider is that forcing the Republicans to get rid of the filibuster may encourage Anthony Kennedy, the swing vote on the Court, to postpone his retirement, thereby depriving Trump of the opportunity to appoint another ultra-conservative judge. Without knowing Kennedy’s mind, it is hard to assess this argument, but some legal experts, including the aforementioned Tribe, of Harvard, take it seriously. “As part of a long game, the Gorsuch nomination’s fate could be a signal to Kennedy (for whom Gorsuch clerked) about safety of leaving sooner,” Tribe said Wednesday, on Twitter. He went on, “The battle over what many see as a stolen seat is about not just one vacancy but potentially 2, 3, or 4. That’s why stakes are so massive.”

Ultimately, though, it isn’t careful long-term calculus that is driving the Democrats. It is distaste for Trump, and Democratic voters’ insistence that their elected representatives stand up to him at each and every opportunity. This is total warfare now, and the Supreme Court nomination is just one front.