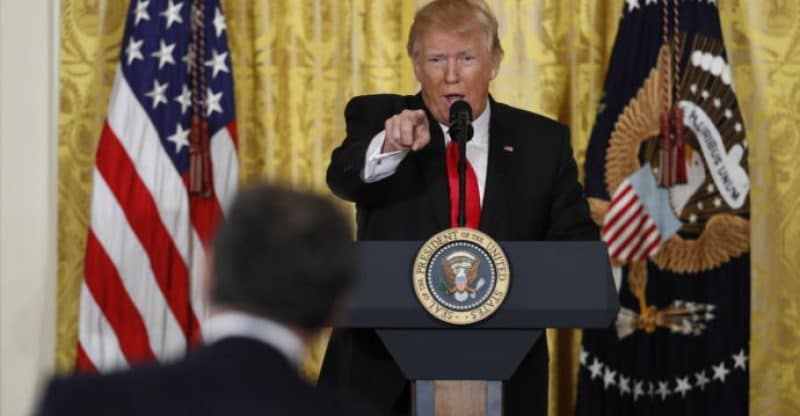 President Trump seems determined to exploit the public’s mistrust of the media to the hilt, if only to distract his base from the disappointments that are sure to come.CreditPHOTOGRAPH BY PABLO MARTINEZ MONSIVAIS / AP

When the leaders of the Bolshevik movement—Lenin, Stalin, and the rest—used the term vrag naroda, an “enemy of the people,” it was an ominous epithet that encompassed a range of “wreckers” and “socially dangerous elements.” Enemies included clergy, intellectuals, monarchists, Trotskyists, “rootless cosmopolitans,” and well-to-do farmers. To be branded an enemy of the people was to face nearly inevitable doom; such a fate was soon followed by a knock on the door in the middle of the night, a prison cell, the Gulag, an icy ditch—a variety of dismal ends. To be called an “enemy of the people” did not mean you had to hold oppositional thoughts or commit oppositional acts; it only meant that the dictator had included you in his grand scheme to insure the compliance of the population.

Robespierre, one of the architects of the Jacobin Reign of Terror, set out to “horrify” the opposition, and his instruments were the epithet, righteousness, and the blade. “The revolutionary government owes to the good citizen all the protection of the nation,” he said. “It owes nothing to the Enemies of the People but death.”

In 1917, the same year as the Bolshevik seizure of power, Vladimir Ilyich Lenin published an essay in Pravda called “Enemies of the People,” in which he lionized the Jacobin Terror as “instructive.” His party, “the Jacobins of the twentieth century,” he wrote, should follow suit, if not with the guillotine, then with mass arrests of “the financial magnates and bigwigs.” Once in power, Lenin was far more brutal than the revolutionary French. He built the first outposts of the gulag archipelago. Stalin, Lenin’s energetic successor, expanded the system from western Russia to the Sea of Okhotsk, ten times zones to the east.

Now, Donald Trump, the elected President of the oldest democracy on earth, a real-estate brander and reality-T.V. star, has taken not to Pravda but to his own preferred instrument of autocratic pronouncement—the tweet—to declare the media “the enemy of the American people.” Here is the declaration in full:

The FAKE NEWS media (failing @nytimes, @NBCNews, @ABC, @CBS, @CNN) is not my enemy, it is the enemy of the American People!

For months, cool, responsible heads have been counselling hot, impulsive heads to avoid overreacting to Trump. We must give him a chance. We must not in all our alarm compare him to all the tin-pot dictators and bloody authoritarians who have disgraced history. The Oval Office—its realities and traditions—will temper his rages. His aides, his son-in-law, and his daughter will “soften” his impulsivity. Besides, he doesn’t really mean all he says. Even as Trump was signing one chilling executive order after another—all with the cool counsel of Steve Bannon, late of Breitbart—we were assured that everything was fine. He was simply fulfilling the agenda of his campaign. Calm down. Don’t react to every tweet. Don’t take the bait.

Then came his press conference, last week, his first solo press conference in office, and it was epochal. Ostensibly an occasion to announce a replacement appointment to the Department of Labor after the first had to step aside, Trump instead took it upon himself to denounce repeatedly and at length the sinful, dishonest press and the “very fake news” it produces. It was unforgettable. With all his nastiness, his self-admiring interruptions and commands (“Sit down! Sit down!”) Trump resembled an over-sauced guy at a bar who was facing three likely options in the near term: a) take a swing at someone, b) get clocked by someone else, or c) pass out and wake up on a hard, alien cot.

But the venue was not a bar. It was the White House, and this was hardly a joke. What Trump resembled at the lectern was an old-fashioned autocrat wielding a very familiar rhetorical strategy.

Joel Simon, the executive director of the Committee to Protect Journalists, makes the point that autocrats from Chávez to Erdoğan, Sisi to Mugabe, all follow a general pattern. They attack and threaten the press with deliberate and ominous intensity; the press, in turn, adopts a more oppositional tone and role. “And then that paves the way for the autocrat’s next move,” Simon told me. “Popular support for the media dwindles and the leader starts instituting restrictions. It’s an old strategy.” Simon pointed to Trump’s lack of originality, recalling that both Néstor Kirchner, of Argentina, and Tabaré Ramón Vázquez, of Uruguay, referred to the press as the “unelected political opposition.” And, as Simon has written, it was the late Hugo Chávez who first mastered Twitter as a way of bypassing the media and providing his supporters with alternative facts.

Trump, as indulgent parents say of an indolent child, is “not a big reader.” He may not hear every historical echo in his “enemy of the American people” tweet. What he does know, however, is that the American trust in “the media”—that generalized term that stretches from the Times to NewsMax—is miserably low. He is determined to exploit that to the hilt, if only to distract his base from the disappointments that are sure to come. On Saturday evening, he held a rally in Melbourne, Florida, and doubled down on the familiar theme: putting himself in the same league as Lincoln and Jefferson, he told the crowd, “Many of our greatest Presidents fought with the media and called them out.” The agenda is always to divide. “They have their own agenda, and their agenda is not your agenda,” he said.

At the same time, there are distinct signs that Trump is losing ground among members of the conservative media who had initially cut him some slack, not least because they felt the liberal media had been besotted by Barack Obama. The attacks on the legitimacy of the courts, on the intentions of the intelligence agencies, and on the patriotism of the press have become too evident, too repulsive to be discounted as mere sideshow. Joe Scarborough, the former Republican congressman from Florida and the co-host of “Morning Joe,” tweeted a telling call to the right on Friday: “Conservatives, feel free to speak up for the Constitution anytime the mood strikes. It is time.”

It’s true that Trump has not arrested any journalists. He has not shuttered any newspapers or television stations or Web sites. I went to work at The New Yorker on Friday and helped close a new issue that includes a deeply reported and tough-minded Letter from Washington, by Nicholas Schmidle, about the Michael Flynn affair, as well as a Comment by George Packer that notes that Trump, at his press conference, “behaved like the unhinged leader of an unstable and barely democratic republic.” Yes, there was a little trouble with a Xerox machine, but no one at the office counted it a threat to the First Amendment. In the meantime, the New York Times and the Washington Post­­ are engaged in a ferociously competitive battle to cover this new Administration that has bolstered the forces of fact and truth; and no one has shut off their computers or phones, either. At CNN, Jeff Zucker, the network president, has gotten telephone calls of bitter complaint from Jared Kushner about the coverage of his father-in-law, but if the performance of Jake Tapper and others there is any indication, the attempt to intimidate CNN has not deflated any spirits. The journalists at Mother Jones, MSNBC, BuzzFeed, The Atlantic, NPR, The National Review, the Marshall Project, ProPublica, and many other outlets are doing their work with determination and seriousness.

In Vladimir Putin’s Russia, as in every genuinely authoritarian state, there are no “enemies”—or, at least, none with the capacity to challenge power. Calling on all the repressive means available in such a state—compliant courts and legislatures; the elimination of political competition; comprehensive censorship of television—soaring popularity ratings are achieved. President Trump may wish for such means, just as he wishes for such popularity. For all the chaos and resulting gloom these past weeks, it has been heartening to see so many “enemies of the American people”—protesters, judges, journalists, citizens of all kinds, even some members of Congress—do their work despite Presidential denunciation, not necessarily as partisans of one party or another but as adherents to a Constitution.