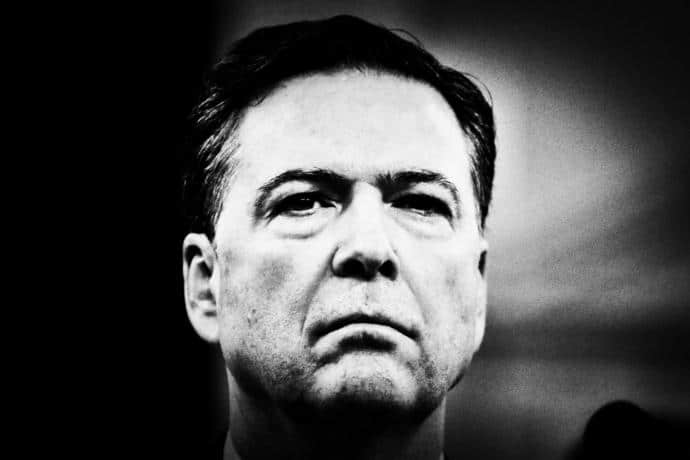 There are very few officials who understand the true extent of the F.B.I. investigation.CreditPHOTOGRAPH BY MARK PETERSON / REDUX FOR THE NEW YORKER

Early on Monday morning, a couple of hours before the start of the first House Intelligence Committee hearing on Russia’s involvement in the Presidential election, one of Donald Trump’s closest White House advisers made a startling—and completely erroneous—prediction: James Comey, the F.B.I. director, would testify that there was no collusion between the Trump campaign and Russia. “The Russian collusion thing has always been bullshit,” the official said. “I think Comey will come down and say there absolutely was no contact, collusion, or anything like that with the campaign.”

The official conceded that, in the early days of the Trump campaign, the candidate attracted some dubious figures. Sam Clovis, an Iowa talk-radio host who had been appointed as Trump’s senior policy adviser, strained to put together a serious team. Meanwhile, fringe political operatives, such as Roger Stone, a longtime Trump adviser, and Stone’s good friend and former business partner Paul Manafort, who became the campaign chairman, had easy access to the candidate. The White House official described these camps as “two converging sets of marginalia.”

“You had Sam Clovis, God bless him, who tried to put together an advisory group of people,” the official said. “Then you have the whole Manafort-Ukraine thing and Roger Stone running around doing whatever Roger Stone is doing.” He added, “This campaign, early on, had a lot of marginalia associated with it. Guys like Carter Page, Roger Stone. I have no earthly idea what those guys have been up to, right?”

Manafort, a longtime political lobbyist, worked for years in Ukrainian politics as a paid adviser for a pro-Putin party, before surfacing back in the United States as a Trump campaign operative, and later, the campaign’s chairman. Stone, who has known Trump for decades, had advance knowledge that WikiLeaks would release e-mails, later determined to have been stolen by Russian hackers, from the account of John Podesta, Hillary Clinton’s campaign chairman. Page, an energy consultant and former Trump campaign adviser, travelled to Moscow last summer for a paid speech. Page, Manafort, and Stone, as well as Michael Flynn, Trump’s former national-security adviser, are reportedly part of an F.B.I. investigation.

The White House official’s attempt to separate Trump from the “marginal” figures who once ran Trump’s campaign isn’t likely to work. Later in the day, Sean Spicer, the White House press secretary, echoed this spin publicly when he claimed that Manafort played a “limited role for a very limited amount of time” in the campaign. In fact, Manafort worked for Trump for six months last year, from March to August, the crucial period in which Trump secured the Republican nomination and fended off potential challenges at the G.O.P. Convention.

But the larger takeaway from the White House’s spin is that the top people around Trump may have no idea how much exposure the President has on the issue of Russian collusion. Two hours after the White House official confidently predicted Comey would vindicate the Administration, Comey did the opposite, saying:

I have been authorized by the Department of Justice to confirm that the F.B.I., as part of our counterintelligence mission, is investigating the Russian government’s efforts to interfere in the 2016 Presidential election, and that includes investigating the nature of any links between individuals associated with the Trump campaign and the Russian government and whether there was any coördination between the campaign and Russia’s efforts. As with any counterintelligence investigation, this will also include an assessment of whether any crimes were committed.

The large gap between what the White House believed about the F.B.I. investigation and the actual facts of that investigation reveals several things. First, Comey has been successful in concealing details from Trump’s closest advisers. One of the reasons that Trump and the White House have been exuding a smokescreen of misinformation is because they are as clueless about what Comey knows as everyone else is. 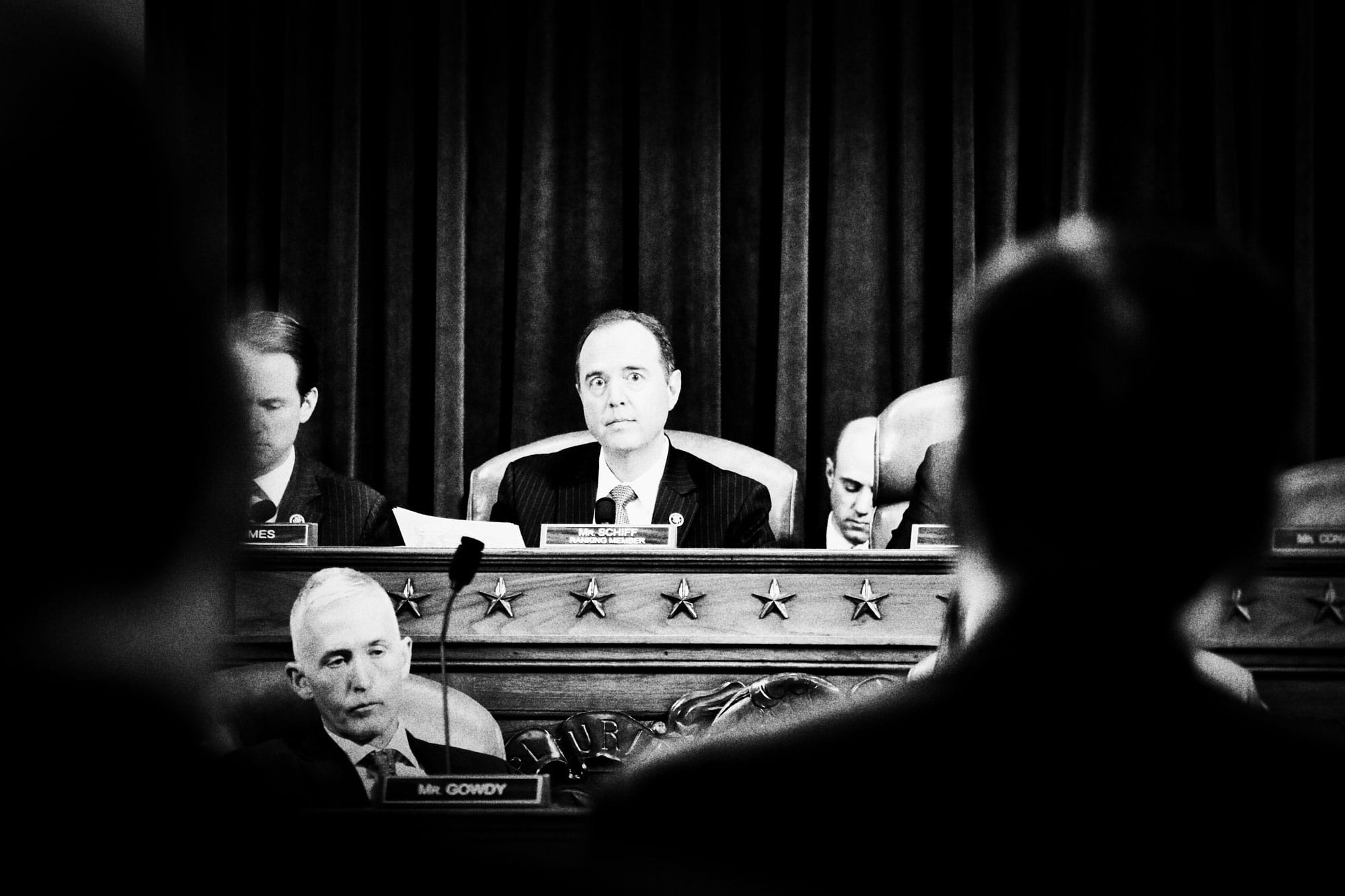 Adam Schiff, the ranking Democrat on the committee, said that he was pleased with the thoroughness of the F.B.I. investigation. PHOTOGRAPH BY MARK PETERSON / REDUX FOR THE NEW YORKER

In fact, there are very few officials who understand the true extent of the investigation. Comey revealed yesterday that the investigation began in late July of 2016. Devin Nunes, the chairman of the House Intelligence Committee, and Adam Schiff, the ranking member for the Democrats, both told me that they did not know the details of the investigation until they recently received a classified briefing from Comey. After that briefing and yesterday’s hearing, Schiff and Nunes have started to take different views of Comey.

Previously, both men had been highly critical of Comey’s level of coöperation, but after the private briefing Schiff began praising Comey. Schiff now believes that the F.B.I. is pursuing a wide-ranging and serious investigation of potential collusion between Trump, or his associates, and the Russians. “We need to do a thorough investigation in Congress, but we don’t have anywhere near the resources that the F.B.I. does,” he told me yesterday afternoon. “So it gives me some level of confidence knowing that an agency that does have the resources is devoting itself to determining just what type of coördination might have taken place.”

For the same reasons that Schiff was pleased with the thoroughness of the F.B.I. investigation, Nunes seemed concerned by it. As Nunes was leaving the hearing, a group of reporters surrounded him near the dais. Asked by one reporter if Comey was as forthcoming as he had hoped, Nunes said no. He complained that he was not informed by Comey about the investigation last year. “But I do think I should have been,” he said tersely. He also complained that there was now a “cloud” over the White House, and said that it was “very problematic” that Comey would not disclose whether current Trump officials were under investigation.

Nunes, like the White House, tried to distance Trump from any actions taken by his former campaign advisers. “I have no evidence of collusion or conspiracy, especially as it relates to anybody who is in the White House,” he said. “There’s all these extra characters out there who I don’t think really had anything to do with the campaign.” Asked by another reporter about Page and Stone, Nunes claimed, implausibly, that he had never heard of them.

But if Nunes seemed concerned it’s because, like the White House and Schiff, he understands that Comey is conducting a wide-ranging inquiry, and that nobody outside the agency knows the extent of it. Someone asked Nunes if Trump himself could be the subject of the F.B.I.’s investigation. Comey had refused to comment when asked the same question earlier during the hearing. “I highly doubt that,” Nunes said. “But you know what? We don’t know everything.”