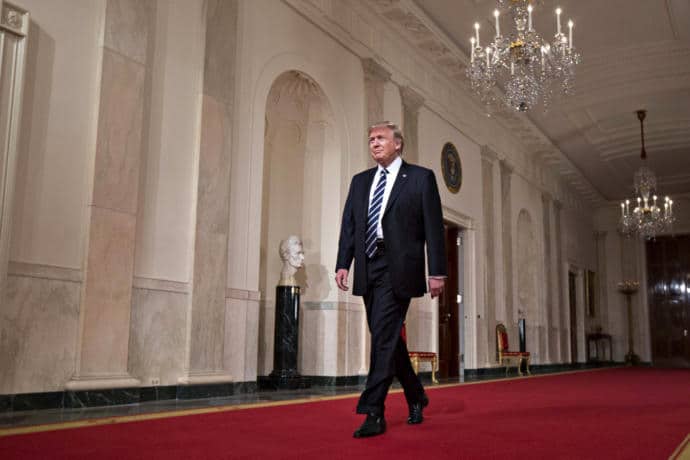 President Trump’s ten judicial appointments show that he intends to use the courts to advance his political agenda.CreditPHOTOGRAPH BY ANDREW HARRER / BLOOMBERG / GETTY

On Monday, President Trump announced his first group of lower-court nominations to the federal bench. The list illustrates how differently Democratic and Republican Presidents have approached the task of making judges: it comes down to ideology versus diversity.

Republicans since Ronald Reagan have recognized the power of federal judges to move the country in a conservative direction. Trump’s nomination of Neil Gorsuch to the Supreme Court showed that the new President belongs to the same tradition, and his ten judicial nominees—five to the circuit courts of appeals and five to the district courts—reveal that he will continue to use the courts to advance his political agenda.

Notably, three of the five nominees for the federal appellate courts are former law professors. Joan Larsen, who taught at the University of Michigan Law School and now serves on the Michigan Supreme Court, was nominated to the Sixth Circuit; David Stras, who taught at the University of Minnesota Law School and now serves on the Minnesota Supreme Court, was nominated to the Eighth Circuit; and Amy Barrett, who teaches at Notre Dame Law School, was tapped for the Seventh Circuit. They all appear to be intellectually accomplished, personally honorable, and highly conservative, with jurisprudential philosophies in line with those of Samuel Alito and Clarence Thomas. (Here are fuller biographies.) Reagan nominated Antonin Scalia and Robert Bork, both law professors at the time, to the D.C. Circuit and then to the Supreme Court, and ever since, Republican Presidents have sought to populate all levels of the courts with strong ideologists. (The Senate confirmed Scalia to the high court in 1986 but rejected Bork the following year.)

In 2014, when I interviewed President Barack Obama about his judicial selections, he made it clear that diversity, rather than ideology, was his priority. “I think there are some particular groups that historically have been underrepresented—like Latinos and Asian-Americans—that represent a larger and larger portion of the population,” Obama told me. “And so for them to be able to see folks in robes that look like them is going to be important. When I came into office, I think there was one openly gay judge who had been appointed. We’ve appointed ten.” By the time Obama left office, he had indeed made dramatic changes in the composition of the judiciary. Of his three hundred and twenty-nine appointees, nineteen per cent were minorities, compared to sixteen per cent for Bill Clinton and seven per cent for George W. Bush. (Of Trump’s first twelve judicial appointees, one is part of a minority group: Amul Thapar, tapped for the Sixth Circuit, is an Indian-American.) Obama also made an initial effort at bipartisanship in his judicial selections. His first choice for a federal appeals court, David Hamilton, from Indiana, was made with the approval of Richard Lugar, the state’s senior senator at the time, and a Republican. Nevertheless, Republicans in the Senate filibustered Hamilton, as they proceeded to obstruct and delay virtually every Obama appointment, culminating in their successful block of Merrick Garland’s nomination to the Supreme Court. Trump, in choosing his latest nominees, didn’t bother to consult any Democrats.

Obama, in contrast to his Republican predecessors and successor, appointed few law professors to judgeships—though he did nominate one, Elena Kagan, to the Supreme Court. His nominees, like Clinton’s, tended to be former prosecutors and state-court judges. For a onetime law professor, Obama had a curiously restrained view of the ability of courts to advance (or restrain) his agenda. He was a great believer in political change bubbling up from the people to their elected officials, rather than being imposed by unelected judges. Inspired more by the marches led by Martin Luther King, Jr., than by the lawsuits brought by Thurgood Marshall, Obama thought that enduring change came, above all, from popular mobilization and enlightenment.

Republicans, meanwhile, have embraced the judiciary as a vehicle for political change. As I wrote recently in the magazine, Trump essentially outsourced his selection of Gorsuch to Leonard Leo, of the Federalist Society, a conservative lawyers’ organization. As a judge on the Tenth Circuit, Gorsuch drew attention to himself by strongly embracing a key plank of the conservative legal agenda—the claim by Hobby Lobby, a retail chain owned by a religiously devout family, that it could exempt itself from provisions of the Affordable Care Act, which require employers to provide birth-control benefits.

In the early days of the Trump Administration, we’ve already seen ample evidence of the importance of judges to a President’s agenda. Federal district judges have twice rejected Trump’s proposed travel ban for people from predominately Muslim nations; another judge put on hold Trump’s attempt to punish so-called sanctuary cities, which aim to provide some protections for undocumented immigrants. Not all the judges who ruled against Trump have been Democratic appointees, but there is no question that Democratic appointees have been more skeptical of the Administration’s arguments. Just as the difference between Democratic and Republican legislators has rarely been greater than it is today, the same is true of Democratic and Republican appointees to the federal bench. President Trump and his fellow-Republicans recognize this critical fact, and they’re moving quickly to leave an enduring mark on this part of our government and our laws.