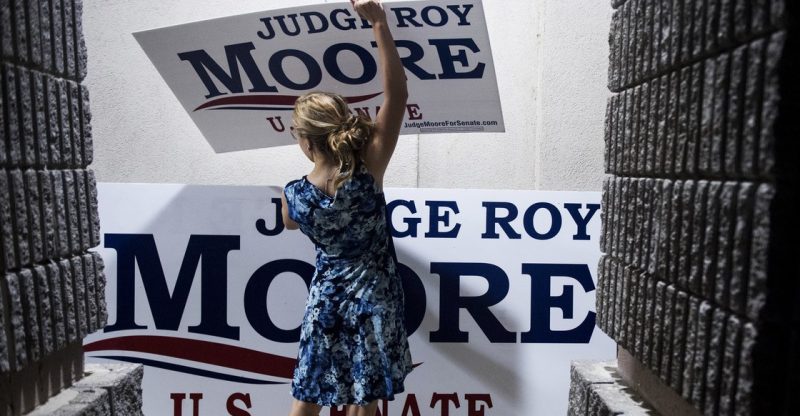 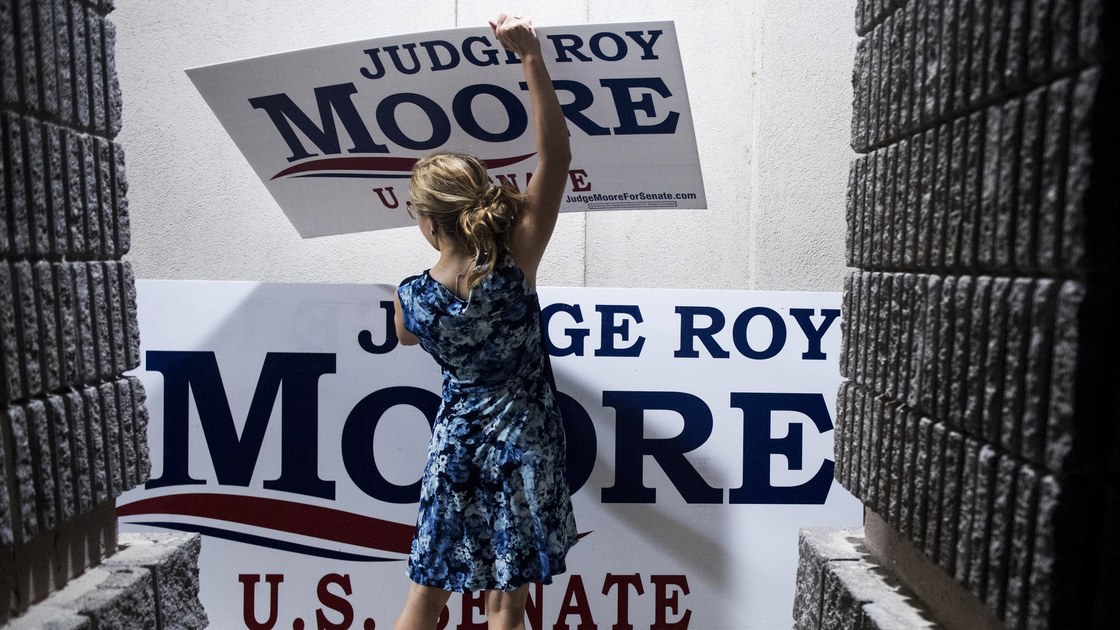 Early on Tuesday morning, as Americans were recoiling from Donald Trump’s latest comments on the tragic events in Charlottesville, he decided to send out a celebratory tweet: “Congratulation to Roy Moore and Luther Strange for being the final two and heading into a September runoff in Alabama. Exciting race!” Moore and Strange, who are contending for the Republican nomination in a special U.S. Senate election, actually have a third competitor—there is a Democrat in the race—and, despite what Trump tried to pass off as his ecumenical cheer, the candidate he endorsed, Strange, got only thirty-two per cent of the vote, behind Moore, who had thirty-nine per cent. Nonetheless, the entire race has been a festival of Trump-tinged disorder.

To appreciate the interwoven strands of absurdity and political degradation in the Alabama campaign, one might start with the question of why there’s a special election in the first place. The seat had been held by Jeff Sessions, who was highly popular in Alabama and who, last year, gave Trump his first senatorial endorsement and then campaigned for him enthusiastically. Trump awarded him with the job of Attorney General and, in the past few months, a series of almost ritual humiliations. (“VERY weak!”) At one point, it looked as if there might be only days left in Sessions’s tenure, and his position still appears precarious; it now seems to depend on his openness to obstructing justice. In other words, Sessions might be out of his new job with two rounds of voting still to go to determine who gets his old one.

Roy Moore, meanwhile, had quit his most recent job, as Alabama’s chief judge, after being suspended for telling other state judges not to listen to their colleagues on the federal bench—not even those on the Supreme Court. Those instructions had been inspired by his rage at local judges and officials who, after the Court ruled in favor of marriage equality, actually seemed ready to let couples marry. It was his second time losing that job: the first was in 2004, when he defied a federal-court order saying that he needed to take a large stone statue engraved with the Ten Commandments out of his courthouse. Moore has said that Christianity, or his brand of it, comes before even state law. But while, or maybe because, he has any number of problems with the Constitution, Moore does not have a problem with Trump. When he was asked about the President’s endorsement of Strange, Moore said that he wasn’t worried about losing Trump voters, because “They’re voting for his agenda, which I firmly believe in.” He has presented himself as someone who would be willful and stubborn enough, or just extreme enough, to follow Trump even if Party leaders decided that it was madness to do so. Also, he rode a horse to the polls to cast a vote for himself.

Strange, too, has changed jobs recently. Until February, he was the Attorney General of Alabama, and deep in a felony investigation of the state’s governor at the time, Robert Bentley, in a case involving ethics and campaign violations, and what was, reportedly, a wildly indiscreet affair with an aide. (Certain of Bentley’s family members recorded his conversations with the aide, and the transcripts were, inevitably, published online.) At the same time, Bentley, exercising his gubernatorial power, was interviewing candidates to replace Sessions in the Senate—one of whom was Strange, the man investigating him. However much Strange wanted to be a senator, he might have avoided a scenario so clearly rife in potential conflicts; the Senate seat amounted to a favor to a prosecutor from a man facing potential felony charges. Strange could have waited to run in the primary against whomever Bentley did appoint. Instead, he headed to the Senate, with little regard for how the circumstances of his appointment may have compromised him. But perhaps Trump likes that about Strange. Trump turned on Sessions after the Attorney General recused himself from the investigation of possible Russian interference in the Presidential election; the President may prefer someone who doesn’t worry about apparent conflicts of interest. (He might also remember, though, that Bentley had to resign, anyway.)

Strange, in his role as temporary senator, went to work not just meeting the expectations for Party loyalty that Trump and Senate Majority Leader Mitch McConnell set but exceeding them. McConnell responded by directing Party resources to Strange’s campaign, and Trump made some robocalls for him. (“The final pitch is: Listen to President Trump,” Strange said, the day before the primary.) Then another challenger made a move: U.S. Representative Mo Brooks, a member of the Freedom Caucus, who campaigned on the premise that he is more Trumpish than Trump’s designated candidate, because he, like Trump, is disdainful of McConnell, who is a Washington insider and not nearly enough of an absolutist. Brooks said that McConnell had “misled” Trump about Strange, and added, “I still support the America First Agenda.”

At one point, the candidates were close in the polls, but Brooks ended up with just twenty per cent of the vote, meaning that he won’t be on the second-round ballot, on September 26th. Trump seems to think that this is due to his intervention. A couple of hours after he posted his first Alabama tweet, he issued a self-glorifying addendum: “Wow, Senator Luther Strange picked up a lot of additional support since my endorsement. Now in September runoff. Strong on Wall & Crime!”

After the runoff, Moore or Strange will face Doug Jones, the Democrat, a lawyer and a former U.S. Attorney, who has a strong record prosecuting the Klan. In the early two-thousands, he worked on the re-opened case of the 1963 Birmingham church bombing, and won a conviction. Jones got sixty-three per cent of his primary vote, avoiding a runoff. (His closest contender, a certain Robert Kennedy, Jr., who is not related to the late senator from New York, got nearly twenty per cent, even though he regularly declined to give voters much information about himself, such as the identity of his current employer.) But Alabama is a heavily Republican state; Trump won sixty-two per cent of the vote there last November. And anyone looking to this race for a sign that Trump’s capacity to influence and distort the G.O.P. has waned—that, somehow, political sanity has taken hold—should not get too excited. Not yet.