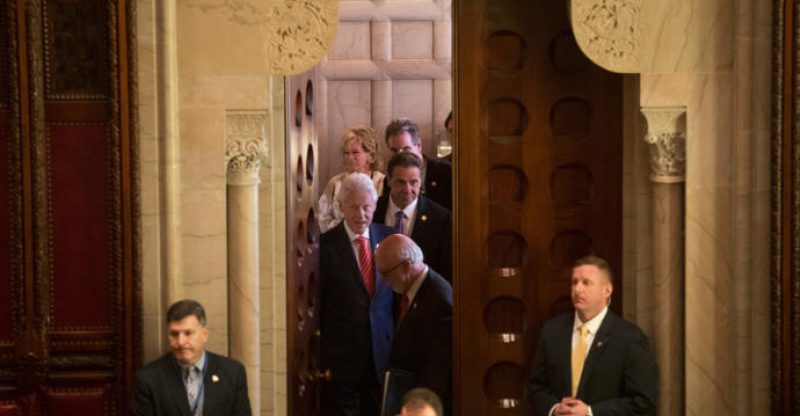 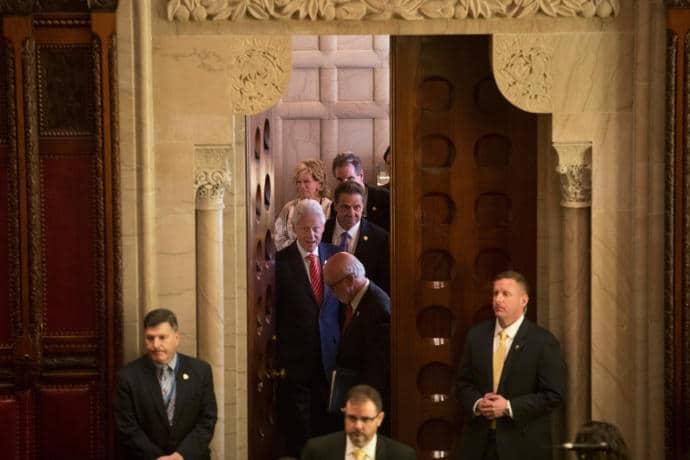 Bill Clinton and Andrew Cuomo, both electors, at the Electoral College meeting at the New York State Senate, in Albany, on Monday. CreditPHOTOGRAPH BY NATHANIEL BROOKS / THE NEW YORK TIMES / REDUX

The procedures of the Electoral College have not been much modernized. On Monday, Illinois electors arrived in the state capitol, in Springfield, to cast their votes, and each was presented with a paper ballot and a commemorative pen, wrapped in cellophane. The electors were meant to mark their selections with an “X,” ink on blue paper, after which the ballots would be sent to the National Archives, in Washington D.C., where they will rest, under seal, until January 7th, when the Vice-President will open and ceremonially count them. Until then, there is no formal mechanism to know how the votes have gone. If this was to be the scene of a revolution, as some liberals and electors had in the past month begun to hope, it would have been a very strange one, carried out via pen and ink by people whom, for the most part, no one knew anything about.

There were affecting scenes, and intemperate ones. In New York, Bill Clinton, having sought the post of elector to vote his wife into office, cast a wholly futile vote. Meanwhile, Bill de Blasio, enmeshed in a feud with Governor Andrew Cuomo, sat with the Republicans in Albany, and tweeted that the Electoral College should be abolished. In Madison, protesters shouted at Wisconsin’s electors after they voted to give their state’s votes to Donald Trump—“You sold out our country!”—but there was nothing they could do to change the outcome. There were defections. At least three Democratic electors in Washington State wrote in Colin Powell, and one cast a ballot for the environmental activist Faith Spotted Eagle. But nearly all the other votes so far have gone for Trump and Hillary Clinton as expected. There have been no new reports of Republican electors breaking with Trump, and Democratic electors who had hoped for a more dramatic event have been griping about Clinton’s disinterest in their cause. In the end, the campaign to persuade electors to abandon their pledges to Trump and instead vote their conscience yielded one pretty solid “Saturday Night Live” sketch and perhaps just one Republican convert, Chris Suprun, of Texas, who marked his ballot for John Kasich. “The question is, are there thirty-seven Republicans?” John Podesta, Clinton’s campaign chairman, asked on “Meet the Press” on Sunday, referring to the number of G.O.P. defections needed to put Trump’s cause in jeopardy. Lawrence Lessig, the Harvard law professor and activist who had promised pro-bono legal advice to Republican electors who broke their pledges, said last week that twenty Republican electors might break ranks. Reince Priebus, the chairman of the Republican Party, said he was sure there was only one. It looks like Priebus had the better information.

One reason that few Republicans were willing to join the protest might be that the protest was designed by Democrats. A handful of Democratic electors (calling themselves Hamilton Electors, and led by a graduate student and part-time Uber and Lyft driver from Colorado and a manager at Microsoft) had been working hard to design a compromise alternative to Clinton or Trump. The two figures they put forward most often were Kasich and Mitt Romney, both country-club Republicans who represent a strain of American politics whose influence on G.O.P. voters is vanishing. “I have no problem casting my vote for Mitt Romney,” one Democratic elector said, but then this put Republicans in the position of choosing the member of their party whom their party most wanted or the member of the party whom the Democratic Party most wanted. This wasn’t an organic movement. It was a gesture at a shared memory.

It hadn’t been really obvious, either, what authority the dissident Republican electors were supposed to claim, beyond a sense of personal revulsion. Why them? “I would prefer that another person had been nominated by the Republican Party and had won the election, but am I going to go against 14 million [primary voters] who voted for Trump? And am I going to vote against all the people in Oklahoma who voted two-to-one for Trump?” Charlie Potts, an anti-Trump Oklahoma Republican elector who had been seen as a potential dissident, told Politico recently. “No, that’s just stupid.”

During Presidential campaigns, individuals matter. In 2016, Trump and Clinton mattered most of all, but so did Steve Bannon and Robby Mook, and Khizr Khan and Priebus, and Astrid Silva and Alicia Machado. Part of the romance of campaigns is the conviction that the actions of a single individual, on the right issue and at the right moment, might turn history. The plea of the Hamilton Electors was premised on the idea that we were still in that moment, that the heavier grind of parties, states, staffing, and legislative agendas had not yet fully displaced the dynamics of the campaign. Suprun, the one Republican elector to turn against Trump, spent the weekend visiting the Lincoln Memorial and this morning published a plea that his fellow-electors “be more than bean-counters, to exercise actual intelligence.”

The pace of world events is quickening again. Today, as the electors met, a young Turkish riot policeman assassinated the Russian ambassador in an art gallery in Ankara, as a protest (the riot policeman said, before he himself was killed) against Moscow’s hand in the massacres in Aleppo. In Berlin, someone plowed a truck into a Christmas market, killing nine people. There were alarming reports from West Virginia, accusing pharmaceutical companies of flooding the state with prescription pain pills, and one from Reuters suggesting that nearly three thousand American cities and towns have more than twice as much lead in their water as Flint did at the peak of its health crisis.

The anxiety that spurred the Hamilton Elector campaign is that Trump is simply not equipped to handle this world. “Bish . . . he cray,” read the signs that Kate McKinnon’s Hillary Clinton holds up to try to sway an elector in that “S.N.L.” sketch this weekend. “He’s refusing security briefings. He’s already provoked the Chinese.” Against the defects in Trump’s character, the dissident electors meant to set their own. Do not be bean counters, the exhortation went, but everything about the Electoral College suggested that was exactly what they were expected to be. Against the weight of a democracy of three hundred million people, they had only the commemorative pens and pads they were given. 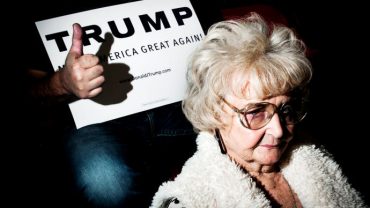