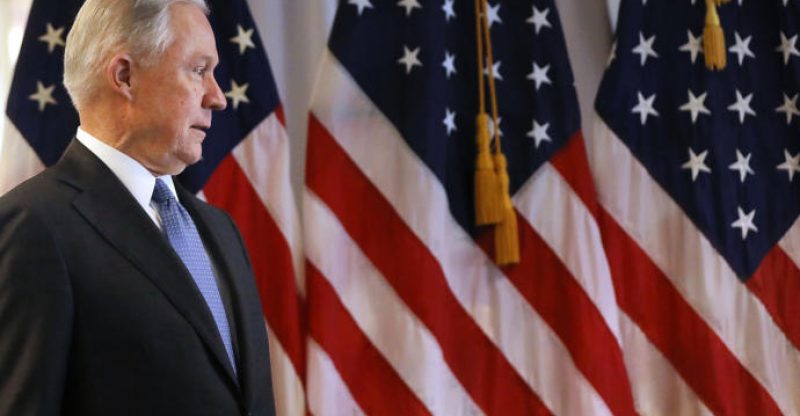 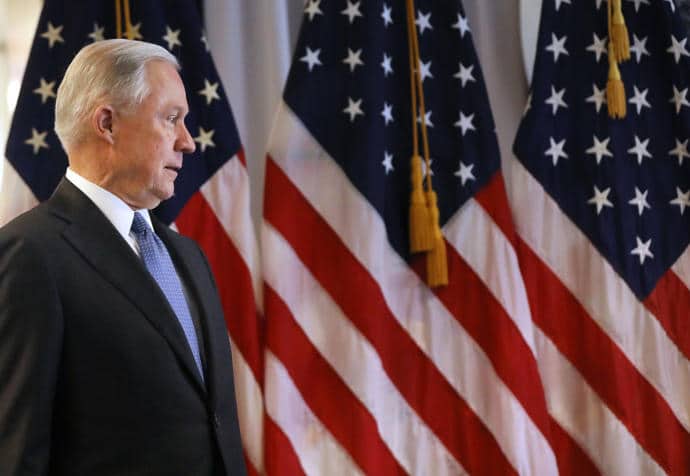 Attorney General Jeff Sessions in Central Islip to confer with law-enforcement officials about the MS-13 gang, which he has called “one of the gravest threats to American public safety.” CreditPHOTOGRAPH BY SPENCER PLATT / GETTY

“You know about MS-13?” President Trump asked a crowd at an N.R.A. rally last month in Atlanta. He was talking about the Salvadoran street gang notorious for its violence and brutality in Central America and the U.S. “Get them the hell out of here, right? Get them out,” he said, as the crowd roared.

For a politician eager to sound tough on immigrants who commit crimes, MS-13 makes a powerful talking point. There are roughly six thousand MS-13 gangsters in the U.S., operating in more than forty states, according to estimates by the Justice Department, and they have a reputation for committing horrific acts of violence. Their organizational ambitions, though, are limited: they are less concerned with running illicit businesses, like drug smuggling, than they are with asserting power over their local turf. Historically, the gang’s presence has been strongest on the West Coast, but in recent years its chapters, known as cliques, have cropped up along the Eastern Seaboard as well. It is notably active in Suffolk County, New York, where, since last fall, members of the gang have been blamed for about a dozen murders, including the brutal killing of two teen-age girls—ages fifteen and sixteen—with baseball bats and machetes. Situated just east of New York City, Suffolk County has a significant population of immigrants, both documented and not. The Suffolk County Police Department estimates that there are about four hundred and fifty MS-13 members in the area, most of them concentrated in two predominantly working-class towns, Brentwood and Central Islip. The gang’s numbers are minuscule in relation to the total immigrant population on Long Island (roughly half a million, over-all) and to the Salvadoran population in Suffolk County (about sixty thousand). But, in the past two years, gang crime has risen in the area, and the threat posed by MS-13 is both alarming and undeniable.

The Trump Administration has made MS-13 a central part of its case for harsh immigration policies. Late last month, Attorney General Jeff Sessions travelled to Central Islip to confer with law-enforcement officials about the gang, which he has called “one of the gravest threats to American public safety.” He held a press conference at a federal courthouse, where he vowed to curb crime, restrict immigration, and staunch the flow of drugs. “The President made a promise to make America safe again,” he said. “He is very aware, personally, of the violence and murders here.” Federal law enforcement would identify criminal networks and dismantle them by deporting their members. “Restoring a lawful system of immigration,” he said, was “an essential part of our strategy.”

Suffolk County was one of the largest suburban areas in the country to flip from solidly blue in 2012 (Obama won the county by four points) to red in 2016 (Trump took it by seven points). Still, Sessions’s appearance there wasn’t welcomed by everybody. Toward the end of the press conference, a reporter mentioned that anti-Trump protesters were gathered outside the courthouse. “I don’t know if you saw them when you came in, but they are claiming this is merely an attempt to advance an anti-immigrant agenda,” she said. Peter King, the cantankerous Republican congressman from the district, who had invited Sessions and was standing alongside him during the event, interjected to call the protesters “shameful.” Didn’t they understand that the federal government was finally paying attention to Suffolk County?

Among the assembled press and local officials in the room was Timothy Sini, the thirty-six-year-old commissioner of the Suffolk County Police. A former Assistant U.S. Attorney, Sini took command of the department in the fall of 2015. The previous year, a Suffolk County Police sergeant had been arrested for stealing from Latino drivers during traffic stops. (He was later convicted.) And the sergeant’s arrest was just the latest point of tension between police and local immigrants. In 2008, a gruesome murder of an Ecuadorian immigrant by a group of teen-agers exposed the degree to which local officials had failed to address mounting anti-Latino violence, and prompted a Justice Department investigation into discriminatory policing and an agreement, in 2013, to reform police practices.* Sini saw his task as repairing trust with immigrant communities in the area, especially since their coöperation would be essential in rooting out MS-13 gangsters.

I spoke to Sini a few days after the Sessions event, and he told me that the political climate since Trump’s election has complicated his outreach efforts. With constant news of immigration raids and arrests, residents are reluctant to come forward and report crimes. “The undocumented community, on top of fearing MS-13, is fearful that if they interact with law enforcement they’ll get deported, or a loved one will,” Sini said. He was cautious when answering questions, and was careful not to criticize the new Administration. But he also made an effort to distinguish his department from other law-enforcement bodies. “We have to compete now with concerns and anxieties created by other government agencies,” he said. “We have to compete with that noise.”

A terrible irony of the MS-13 problem—and what makes Sessions’s threats of mass deportations so concerning—is that the U.S.’s own immigration policies are largely responsible for fuelling the gang’s rise. It was formed in the late nineteen-seventies as a Los Angeles street gang, but it cemented its power and reputation in the nineteen-nineties, after its members were deported to El Salvador, where they were able to overrun local authorities. The gang spread throughout Central America, contributing to a surge in violence that drove tens of thousands of people to flee to the U.S.

Trying to stem the bloodshed and crime that was spurring the mass migration north, the Obama Administration partnered with governments in Central America to combat MS-13 and other gangs—but with mixed results. Migrants from Central America continued crossing U.S. borders, and the arrival of large numbers of unaccompanied children, in particular, became a full-blown humanitarian crisis. Since 2014, more than a hundred and fifty thousand such children have been granted asylum as refugees. The federal government has tried to find them homes, placing many of them with relatives and family sponsors around the country. More than eight thousand minors were placed in homes on Long Island, mostly in Suffolk County. There, some became targets for recruitment by MS-13. “An organization that preys on the most vulnerable has figured out who the most vulnerable people are,” Steven Bellone, the county executive, told me. Local officials say that the Obama Administration didn’t do enough to equip the community to deal with the influx of child refugees, and they resent what they see as federal action taken at their expense.

Often, these children barely knew the relatives with whom they were sent to live, and they arrived with little command of English. They were also often bewildered to find that the very gang violence they were fleeing in their home countries was present in the U.S., too. “There’s no question that the unaccompanied-children program has contributed to the gang problems,” Sini said. “But it’s a complex problem. The vast majority of these kids are law-abiding. The highly vulnerable ones need case managers, people who are directly involved in their lives. Our school districts need to receive additional funding.” Local advocates have long been making this argument. They say that gang prevention and humanitarian relief should be considered one and the same but often aren’t. “If you say, ‘We should help these kids,’ nothing would happen,” Patrick Young, a lawyer at an immigrant-aid organization called CARECEN, told me. “If you say, ‘We want to invest in gang prevention,’ everyone would say, ‘Sure.’ ”

Sini firmly believes that law enforcement, alone, can do only so much to eradicate the gangs. “Taking dangerous people off the street,” he told me, was just the beginning. He is trying to bring a different philosophy to policing in Suffolk County, one that prioritizes coöperation over intimidation, so that his officers can connect with the immigrants who bear the brunt of the gang’s violence. The department has enlisted teachers and religious leaders to become neighborhood “ambassadors,” and officers have been hosting monthly information sessions to respond to community members’ questions and concerns. “We solve crimes based on people coming to us,” Sini has said. “It’s that simple. If people think they’re going to get deported every time they speak to a police officer, it’s not helpful.”

On Monday afternoon, a few days after Sessions left town, five officers from the Third Precinct of the Suffolk County Police Department arrived at the modest offices of CARECEN, in Brentwood. They were visiting an English class with thirteen students—eleven women and two men, who ranged in age from their late twenties to their mid-fifties. The officers asked how the students were doing, and one woman, pointing to their badges, replied, “Very worried.” Everyone laughed. An officer told the group, “We’re not here for anything to do with immigration. We’ll never ask you for your papers. If we do, you can actually fill out a complaint with our office.” The conversation was wide-ranging—at one point, the officers distributed a pamphlet titled “what to do when a police officer stops you”—but the subject of MS-13 and gangs eventually came up. “The community needs our help with this, and we need your help,” one of the officers said. “If you have kids you’re worried about, tell us and we can help.” The students listened but said nothing, and the officers left it at that.

*An earlier version of this post misidentified the victim’s nationality. 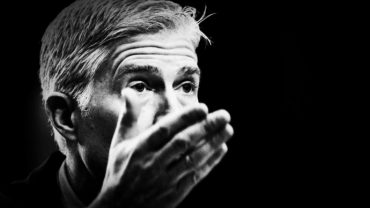