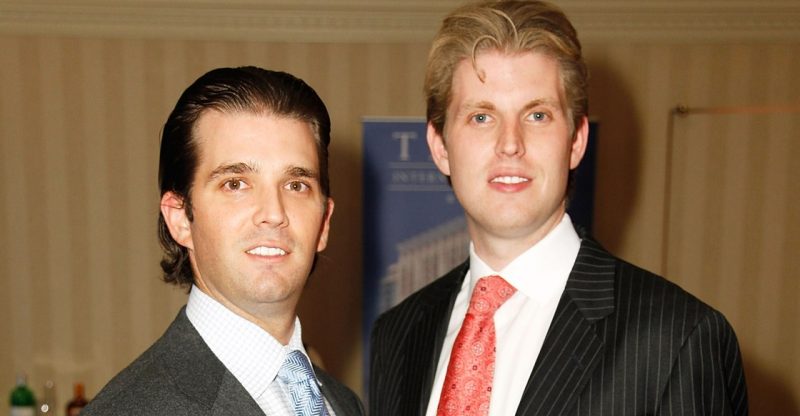 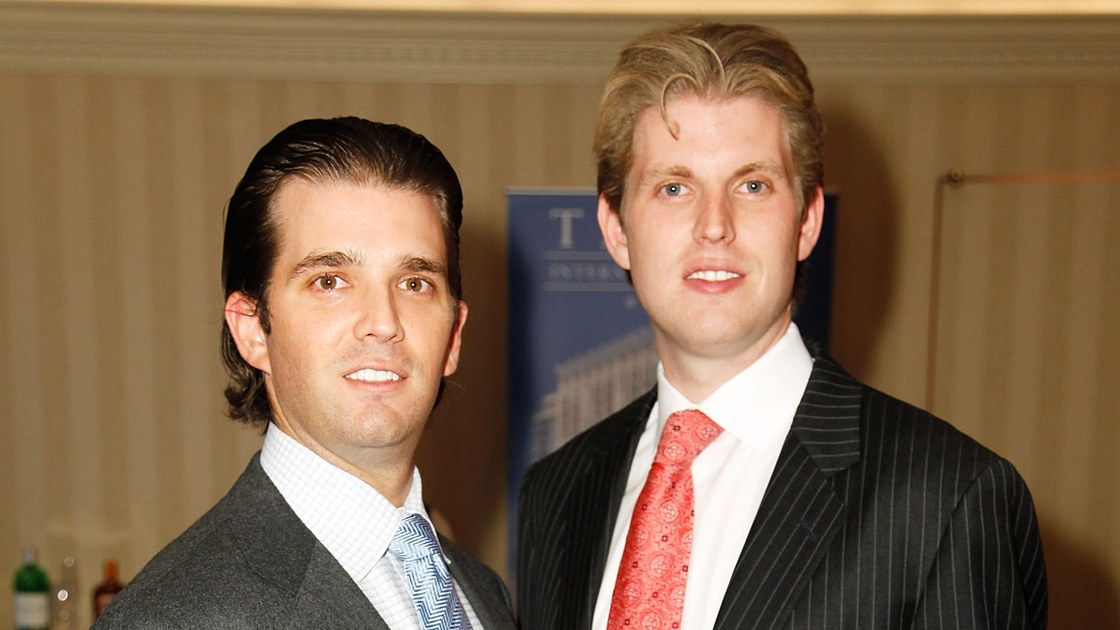 In January, 2015, shortly after Mike Huckabee announced that he was exploring a second bid for the Presidency, a Twitter user with the handle @JuliusIrvington posted an old Huckabee family photo in which the politician, wearing a blue-and-white striped shirt, sits next to his wife on a wooden bench. Behind them, three kids smile at the camera. On the right is a young Sarah Huckabee (now Sanders). Next to her are her two brothers, John Mark and David, who are the same size as their father and wear matching striped shirts. “My favorite thing in the world is that Mike Huckabee literally has large adult sons,” @JuliusIrvington wrote.

This seems to be roughly when the large-son meme went more or less mainstream. It had been germinating in arcane corners of the Internet for a couple of years by then. In 2012, the Twitter user @MuscularSon, who eventually deleted his account, started tweeting in character as a beleaguered father of several mythically rowdy boys. “i cant control my enormous nerd sons. they force me to cosplay as a police box from Dr Who and take turns paintballing my enormous nude torso,” he wrote. And later, “my two awful big sons got into the 20 quarts of hummus i have and now their heading toward The City.” In November, 2013, @dril, the ur-account for this genre of absurdist online humor, tweeted, “i have trained my two fat identical sons to sit outside of my office and protect my brain from mindfreaks by meditating intensely.” In 2014, he tweeted, “please pray for my sons Thursten and Gorse, who have just glued themselves to a curtain.” By then, the image—a tornado of havoc around a couple of big, rambunctious sons—had somehow solidified as a comic trope.

The galaxy of large adult sons contains many constellations, and sons don’t necessarily have to be adults to belong. In November, 2014, the parody Web site Clickhole posted a BuzzFeed-style quiz called “Which One of My Garbage Sons Are You?” “I’ve got some shit boys,” the intro read. “My huge beautiful wife gave me children who think and speak like the toilet. I have four garbage sons: The first son is named Royce, the second son is named Preston, the third son is named Lance and Blake (two names for just one son), and the fourth son is the dreaded Laramie. Which one of my toxic sons are you? Take this quiz to find out!” My result: “You are a real trash mountain of a son who came marching out of my huge beautiful wife on the worst day to ever happen.” I was working at Gawker Media when this quiz was posted, and it derailed all operations for about an hour.

Once you’re made aware of the preponderance of large adult sons in our culture, you will start seeing large adult sons everywhere. Like all the best memes, it is essentially good-natured: “large” is a proud but gentle word, used in this context the way a gardener might talk about a beautiful butternut squash. The meme is also highly flexible, as Barry Petchesky, the deputy editor of Deadspin, pointed out to me over e-mail: “Literally every man in America is someone’s large adult son.” Sports media, in particular, has adapted it as a term for what Tom Ley, the managing editor of Deadspin, calls “big lovable galoots.” In April, SB Nation ran a piece unpacking “the myth of Aaron Judge, our large adult baseball son.” Sports Illustrated responded, arguing that the Cubs leftfielder Kyle Schwarber was the true large adult son of the M.L.B. (“How can anyone be said to match Schwarber in terms of being a big beefy boy?” Jon Tayler asked.)

But the Huckabee sons remain the poster boys for the meme. “They are very large, they are adult, and they are so clearly Huckabee’s sons,” Petchesky noted. They also fully fit the archetype. David, notoriously, once killed a dog at summer camp, and John Mark once acted in a low-budget film in which he smoked cigarettes while assuring a female character that it was normal to “suck a little dick to get a part.” This is classic large-adult-son behavior: alarming, with a whiff of the surreal. The Huckabee boys also remain cloaked by the cartoonish piety that undergirds their father’s politics. The situation resembles a 2014 @dril tweet: “my big sons have made a mess of the garage again after being riled up by the good word of the Lord.” The definitive quality of the large adult son is that he is endlessly excusable: though he does nothing right, he can do no wrong.

These days, it’s getting harder to separate the large-adult-son meme—one of the few reliably good things on the Internet—from the larger hellscape of adult-male behavior in which we all live. The Times recently ran a trifecta of pieces from writers across the ideological spectrum who all believe men are acting too much like boys. In a column titled “Before Manliness Loses Its Virtue,” David Brooks argued that it is embarrassing—for the country, but also for the institution of masculinity itself—that the President and several of his top advisers are openly needy, puerile, and immature. Senator Ben Sasse, of Nebraska, wrote a column about how, as a teen-ager, he used to perform hard agricultural labor on summer breaks: without the hard-won discipline he honed in the cornfields, he argued, kids these days will take too long to grow up. Jennifer Weiner wrote a column about the men who simply never have to, linking childish YouTube personalities to men like Billy Bush and Ryan Lochte, and—alone among these three columnists—to Donald Trump, Jr., the President’s oldest son.

Don, Jr., is generally portrayed, as he was by “Saturday Night Live,” as the more adult of Donald Trump’s two large adult sons—who are, like the Huckabee sons, prone to taking interesting photos together. But this summer Don, Jr., has become the rowdiest son of all. In July, after the Times reported that he had taken a meeting, in the spring of 2016, with a Kremlin-connected Russian lawyer in the hopes of obtaining negative information about Hillary Clinton, Don, Jr., confirmed the report by tweeting screenshots of the e-mail chain that led up to the meeting. “If it’s what you say I love it especially later in the summer,” he wrote, replying to Rob Goldstone, a British music publicist who had dangled “official documents and information that would incriminate Hillary.” Christopher Wray, Trump’s pick for F.B.I. director, pointed out that Don, Jr., should have taken this offer to the F.B.I. On Thursday afternoon, Reuters reported that grand-jury subpoenas had been issued in connection with the meeting.

At thirty-nine, Don, Jr., is old enough to conduct himself with basic integrity—or, barring that, with basic competence in his plans to deceive. Many people have pointed out the painful absurdity of large adult sons in political families (Don, Jr.; Billy Bush; Ted Kennedy) being excused for shocking behavior well into their thirties when twelve-year-old Tamir Rice was deemed enough of a threat by Cleveland policemen to be shot dead on the sight of his toy gun, in 2014. Donald Trump, Jr., is a mere ten days younger than the French President, Emmanuel Macron. And still, President Trump dictated Don, Jr.,’s original statement and excused him after the scandal broke, calling Don, Jr., a “good boy.”

The large-adult-son meme takes wing from the idea that men overcompensate when they are humiliated, and that a primary source of this humiliation is interdependence—sons act out when they are defined by their fathers, and fathers are disgraced by the oafish flailing of their sons. But it’s memes all the way down with this Administration: Trump, the father of the large adult son of the summer, is himself, clearly, a large adult son. He is the loudmouthed, mischievous, and disorderly child of a presiding father. He loves to get behind the wheel of a truck and pose for the cameras like an important birthday boy. The Web site Gossip Cop recently ran an earnest post headlined “Donald Trump Does NOT Wear ‘Adult Diapers,’ Despite Speculation.” These are strange times we live in. The seas are warming, the summer is ending; each day lasts a century, and we are everywhere ruled by large adult sons. 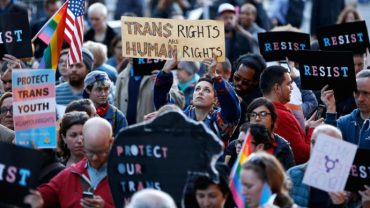