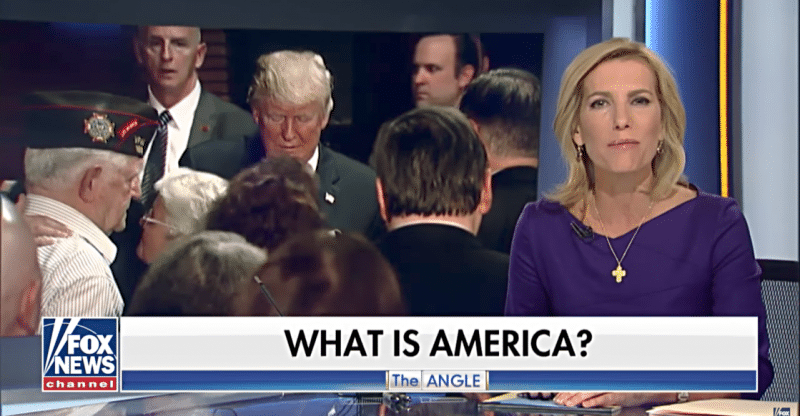 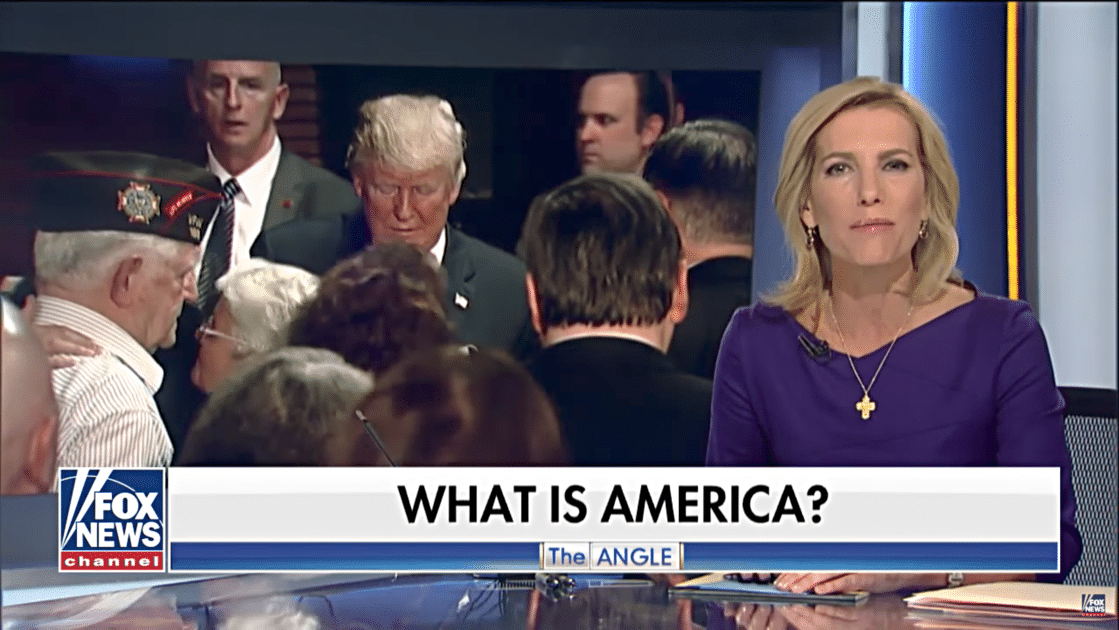 Congratulations to Laura Ingraham on the début of “The Ingraham Angle,” which Fox News emitted into prime time last night, at ten. There cannot be a better hour than this to commit agitprop on Fox. It is her privilege to seep into the feed immediately after the skillful Sean Hannity has softened up the home audience by wielding his voice, manner, and style of argumentation as blunt instruments.

On Monday, for instance, the loyal Fox News viewer would have spent much of the sixty minutes before “The Ingraham Angle” thrilling to Hannity’s invective on the topic of “Uranium One.” Surviving this, any viewer was well primed to receive even a halfhearted masquerade of reasoned discussion as if it were the second coming of John Locke. Lucky for Ingraham, she had a halfhearted masquerade prepared. Also, she had a nervous-jitters smile on her face that was almost sympathetic, and a cross made of gold hanging from her neck.

Her prologue—a soliloquy parallel to the Talking Points Memo of “The O’Reilly Factor” or the Wørd of “The Colbert Report”—was called the Angle, and it was obtuse. The inaugural theme of the Angle was “What is America?” Ingraham connected this query with a Frank Sinatra lyric. She botched the title of the Sinatra song that the lyric comes from, though—it’s not called “What Is America to Me?” Nonetheless, the screen lit up with a handful of photographs of Ol’ Blue Eyes taken in the slow-dancing-with-Nancy-Reagan phase of his career. For the record, Ingraham was quoting a song called “The House I Live In,” which Sinatra performed in a 1945 short film that was created to shame anti-Semitism. One enjoys breaking it to her that the lyricist, who also wrote Billie Holiday’s “Strange Fruit,” happened to have adopted the sons of Julius and Ethel Rosenberg, after they were executed as Soviet spies. “We hope that ‘The House I Live In’ will serve to remind all Americans that patriotism is not limited to the right wing,” the boys once wrote.

Heedless of this reminder, Ingraham proceeded with a monologue championing Trumpian populism as a proper reaction against “special interests, big business, and, of course, the media élites.” Here is the heat of the air she blew: Trump voters “were tired of being bullied by the politicians and the so-called experts who gave us endless wars, saddled us with twenty trillion dollars in debt, and left us with a border more wide open than Harvey Weinstein’s robe.” While Ingraham chuckled at this last phrase, my jaw remained slack at this topical simile’s unique way of evoking visceral disgust while demonstrating multivalent moral idiocy.

Proceeding to list “President Trump’s accomplishments,” which in her telling ranged from the health of the economy to the cinching of the border’s terry-cloth sash, Ingraham asked, “So what are Trump’s opponents resisting again?” It was helpful that she had thus clarified her position, which is pro-Trump but, perhaps more significantly, anti-anti-Trump. His opponents, she said, “really don’t like the American people, not very much at least—or their forefathers. There’s a self-loathing in the air. Do you feel it? Forces hell-bent on erasing our historical memory: American monuments, works of art, literature . . . are being ripped from the classroom and the public square.” It is her belief that Trump voters want “prosperity, safety, and liberty—and that includes preserving our history.”

Here we have the context for Ingraham’s inaugural interview, with the White House chief of staff, John Kelly. And here—to widespread distress, and despite having ably dodged so many questions immediately prior—Kelly vouched for the honor of Robert E. Lee: “The lack of an ability to compromise led to the Civil War.” Witnessed in the world at large, via Twitter tidbits and video clips, Kelly thus underscored the Trump Administration’s commitment to a very generous understanding of the values of the Confederate States of America. Kelly’s remarks, seen in their original context, italicized the premise of this show. To watch the first installment of “The Ingraham Angle”—with its pronounced commitment to “preserving our history,” especially where that preservation concerns the veneration of generals who protected the interests of slaveholders—was to witness Fox’s unapologetic turn toward a type of nationalism that hardly requires Trump’s hands on the wheel of the ship of state.

Lost in the fog of the Civil War is the fact that Ingraham posed Kelly quite a number of stupid questions. When she wondered, “What do you pray for?,” he began, like a pageant contestant, “World peace.” When she asked what his ideal Halloween costume would be, he told her that he’d like to dress up as a Marine Corps sergeant—an answer with a special flavor of condescension when coming from a retired Marine Corps general. At one point, right after the Robert E. Lee bit, she laughingly wondered who might rise up to serve as the self-loathing élite’s choice of an acceptable figure worthy of public statuary. Kelly said, “We can find some cult hero. . . . Andy Warhol or something like that,” and I suppose that this was one of his better answers in the interview. Any number of the artist’s statements speak eloquently toward the civic life of the Republic. Not quite at random, I opened “The Philosophy of Andy Warhol” to page 26: “When I got my first TV set, I stopped caring so much about having close relationships with other people.”