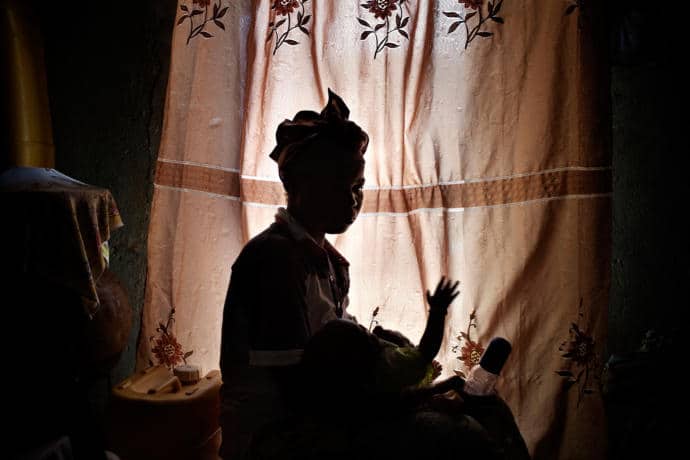 In many of the world’s poorest countries, such as Mali, the impact of the Trump Administration’s indifference to suffering is already clear—and, as in the U.S., women have been particularly targeted. CreditPHOTOGRAPH BY PAOLO PELLEGRIN / MAGNUM

A couple of weeks ago, we learned from the Congressional Budget Office that the House Republicans’ health-care bill, which Donald Trump celebrated with a toast in the Rose Garden, would leave an additional twenty-three million Americans uninsured over the next decade. The President’s budget proposals would also cut or eliminate nearly every major health or welfare program designed to protect the neediest among us. We can only begin to imagine the damage that such measures would inflict if they were to become law.

In many of the world’s poorest countries, however, the impact of the Trump Administration’s indifference to suffering is already clear—and, as in the U.S., women have been particularly targeted. Millions of women in developing countries rely on nongovernmental organizations for their basic health care, including access to contraceptives and abortions. The United States already withholds aid from foreign health organizations that would use that money to provide abortions. But, in an executive order, the President has revived, and the U.S. government has begun to implement, a vastly expanded version of a policy that states that U.S. funds can be directed only to groups that “neither perform nor actively promote abortion as a method of family planning.”

President Ronald Reagan introduced the policy, known as the global gag rule, at the 1984 International Conference on Population, in Mexico City. Since that time, the Mexico City Policy, as it came to be known, has been regularly rescinded by Democrats and reinstated by Republicans, but never on this scale. During the George W. Bush Administration, roughly six hundred million dollars were cut from funding that directly supported organizations such as Planned Parenthood International and the United Nations Population Fund, which provided counselling about abortion services as part of their family-planning assistance, but other programs were not purposely affected. In fact, with the establishment of the President’s Emergency Plan for AIDS Relief, known as PEPFAR, Bush greatly expanded prevention and treatment services throughout Africa, offering testing and counselling to more than fifty million people and providing antiretroviral treatment to nearly eight million people infected with H.I.V.

Trump’s executive order makes no such distinctions: it applies to all $8.8 billion that the U.S. currently sets aside to help provide a vast array of health-care services for the poor throughout the world. In regions such as sub-Saharan Africa, health-care centers are too rare to provide specific services; they must cater to all of their patients’ medical needs. So, even if a local clinic primarily treats people for malaria, H.I.V., or other infectious diseases, its U.S. funding will be eliminated if it also offers access to abortion counselling.

In Mali, which I visited recently, malaria is the leading cause of serious illness for pregnant women and for children under the age of five, and they will be among the gag rule’s primary victims. “People are going to die,’’ a senior European aid official in Bamako, the capital, told me. “This is not hyperbole. And we are talking about the poorest people on earth.” (Like nearly every government official I met in Mali—whether a local representative or one from another country, including the U.S.—he asked for anonymity, fearing a punitive response from the Trump Administration.)

No nation provides more international health assistance than the United States does. And few places need it more than Mali, a fragile country of some eighteen million people, where the per-capita income, last recorded in 2015, was seven hundred and twenty dollars per year—not quite two dollars a day. Despite some recent improvements in health statistics, including vaccination rates, the infant-mortality rate in Mali is among the highest in the world; the average life expectancy—currently around fifty-eight years—is among the lowest. Since 2012, when members of Al Qaeda in the Islamic Maghreb destroyed many of the ancient monuments in the city of Timbuktu, the northern part of the country has been particularly dangerous, and health facilities have suffered. But, even in the south, one only has to drive twenty or thirty miles across the dusty flatlands outside Bamako to understand the implications of Trump’s policy. In most villages, there are no health clinics, and people must travel for hours to reach one, often on foot. Nearly all such chronically underserved areas depend on foreign aid to help provide basic medicine and trained health workers. In 2015, U.S.A.I.D. contributed a hundred and eighty-five million dollars to development in Mali, and most of that money went to fund health programs.

I visited one health center, run by a local midwife, about an hour’s drive west of Bamako. It relies on contributions from the government and from patients, if they can afford to pay. This clinic, housed in a tidy brick building, was better supplied than many. There were four rooms and three cots, and, on the shelves, six blister packs of ibuprofen, a few malaria medications, and some antibiotics. A baby born just two hours before I arrived lay listlessly with his mother on one of the cots. With the broadened gag rule in force, fewer infants will be born safely, and common medications will become harder to find.

It should be noted that the gag rule has never been demonstrated to lower abortion rates. In fact, some studies have shown that it can actually increase the number of abortions, in part because women fear that there will be no adequate health care for sick children. The rule causes a particular complexity for health-care providers who treat women with H.I.V. and AIDS. In 2015, UNAIDS found that nearly forty million people were living with H.I.V. worldwide, and roughly seventy per cent of them were in sub-Saharan Africa. Even if a pregnant woman is infected with H.I.V., providers that raise the possibility of abortion with her will lose their funding. The inevitable result will be the birth of more infected children, who, because of cuts to services, will have even less access to the antiretroviral drugs that they would need to survive.

Women in the developing world already suffer disproportionately when money for health care is sparse. According to the World Health Organization, roughly a quarter of a million women in Africa die of pregnancy-related causes every year, “and approximately 1 million babies are stillborn, of whom at least 300,000 die during labor. A further 1.16 million babies die in their first month of life—up to half on the first day—and another 3.3 million children will die before they reach their fifth birthday.” Funding cuts will only further limit services for natal and neonatal care.

“We have to hope that he will change his mind,’’ Diakalia Koné, the director of Mali’s National Malaria Control Program, told me recently, referring to President Trump. He spoke without rancor or false hopes; he is an optimistic man and believes that his country’s malaria program will survive. But he was also realistic. “Our health problems are considerable,’’ he said. “And the United States has been generous.”