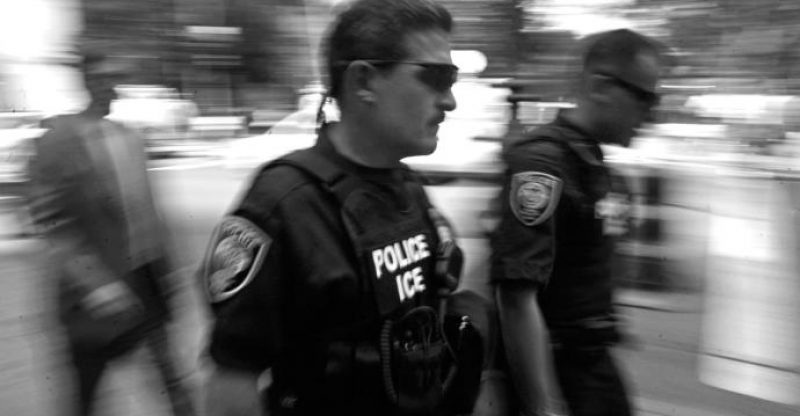 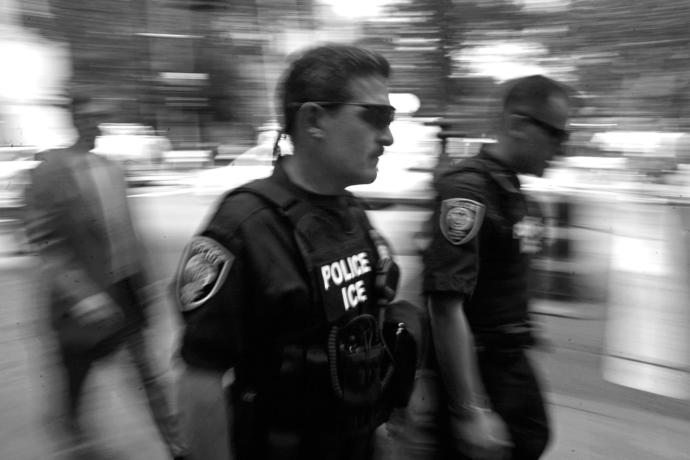 Officers of Immigration and Customs Enforcement, which arrested a transgender woman in Texas earlier this month as she sought a protective order against an abusive ex-boyfriend.CreditPHOTOGRAPH BY JASON DECROW / AP

On the morning of February 9th, Irvin González, a thirty-three-year-old transgender woman, was sitting in a waiting room on the tenth floor of a courthouse in El Paso, Texas. At 9 A.M., a judge was scheduled to hear her request for a protective order against an abusive ex-boyfriend. González was nervous that she’d have to confront him in court, but her caseworker, who was from a local aid agency, reassured her that he might not even be there, and that if he was he wouldn’t be able to get too close. She allowed herself, momentarily, to relax. “I felt very safe and protected in the court,” she said.

A sudden commotion outside the door jolted her upright. González assumed her ex had arrived, and the caseworker hurried out to see what was happening. She returned with unexpected news: an Immigration and Customs Enforcement officer was there to arrest her. Born in Mexico, González had lived in the U.S., off and on, for more than a decade, but was undocumented. She had been deported six times since 2010. ICE had managed to track her to the courthouse. “I did not think this situation would be possible,” she said. Then, before anything else could happen, the judge called González in for her hearing. “I had a hard time understanding some of the judge’s questions because I was thinking about the ICE officer outside,” she said. The judge granted her the protective order, but she left the courtroom in a daze. Her caseworker told her, “Are you ready? We are going to start walking, and then ICE is going to arrest you.”

That week, immigration authorities arrested more than six hundred people across the country in a string of raids, from Staten Island to Seattle. The Department of Homeland Security, which oversees ICE, has insisted that the raids were routine, though they came just days after President Trump issued an executive order expanding the categories of people eligible for deportation. The message was clear even if D.H.S. wouldn’t acknowledge it: a new crackdown on the undocumented had begun. Trump welcomed the news of mass arrests, tweeting that the roundups were “merely the keeping of my campaign promise.” González, who in addition to her past deportations has served prison time in the U.S. for a range of crimes, including larceny and assault, may well have been targeted for deportation under the Obama Administration, which also carried out mass raids and deported millions of people. But the circumstances of González’s arrest were dramatic and highly irregular—and her case drew national headlines.

Earlier this week, I communicated with González, who is being held in a county jail, through her immigration lawyer, Melissa Untereker. (Untereker asked González questions I’d sent in an e-mail, then wrote down and relayed her answers.) González had been in custody for eleven days, and she said she’d been denied the hormones she takes. The withdrawal effects had left her feeling nauseated and uneasy. She wasn’t sleeping, her teeth and head ached, and she’d begun to grow facial hair. “I am in shock,” González said.

According to the federal criminal complaint documenting her arrest, ICE and Border Patrol agents had learned about González’s whereabouts on February 2nd. At the time, she was staying in a shelter for domestic-abuse victims in downtown El Paso. Rather than apprehend her there, the agents waited a week before they picked her up. Local officials were outraged by the decision to arrest her at the courthouse. “I have never seen this before,” the El Paso County Attorney, Jo Anne Bernal, told me. “I’ve been in the courthouse twenty-three years, and I cannot recall immigration officials ever going into a courtroom or targeting a protective-order court.”

The criminal complaint, however, makes no mention of the officers entering the courthouse. In a sworn affidavit, John Urquidi, a Border Patrol agent, said that agents “were conducting surveillance” outside the courthouse that morning, when, “at approximately 9:30AM” they “observed González exiting the El Paso County Courthouse.” This account is easily disproved. Just after González was arrested, Bernal asked her office’s chief investigator to take statements from everyone who had witnessed the incident. An associate judge, a court bailiff, three assistant county attorneys, and González’s caseworker all confirmed that González had been taken into custody on the tenth floor of the courthouse. The arrest was also captured on tape. In a security-camera video that was later made public, two plainclothes officers—one in a hoodie and baseball cap, the other in a khaki jacket—can be seen walking González to the tenth-floor elevators. Another video, from the first floor, shows González and the officers leaving the building together, with one of the officers holding González firmly by her right arm. (This week, a D.H.S. spokesperson conceded to me, in an e-mail, that “the agents encountered González inside the El Paso County Courthouse.”)

González is certain that her ex-boyfriend tipped off the immigration authorities. (He couldn’t be reached for comment.) “This is something he always threatened me with,” she said. “He would tell me that, if I reported him to the police, they would only believe him, because he is a U.S. citizen and not me.” In late January, he had been in jail, for allegedly forging checks, when he was served with an order to appear at the protective-order hearing. By then, González had already lodged three complaints against him in as many months, saying that he had been brutally beating her.

Officials at ICE were circumspect about how they had located González, telling the local press that they had received notice about her from “another law-enforcement body,” without specifying which one. Gonzalez had no local, state, or federal warrants out for her arrest, according to a report by the county attorney’s office. The timing of her arrest, however, was suggestive: the ex-boyfriend, who had been released at the end of January, was re-arrested for violating his probation on February 2nd, the same day that, according to Urquidi’s affidavit, law enforcement “received information” that González “was in the United States.”

González is now in a desperate position. In the next few days, a grand jury will decide whether to indict her on charges of illegal reëntry into the U.S. If the grand jury decides to drop the charges, she’ll be turned over to ICE, which will most likely deport her once more. Either way, her arrest illustrated the lengths to which agents are willing to go to pursue the undocumented. “What message does it send? ‘We are coming after you,’ ” Veronica Escobar, a county judge, said. “We don’t want to rattle the community or scare off other victims who may be afraid to come forward to report abuse.”

Late last week, Escobar and Beto O’Rourke, El Paso’s Democratic congressman, met with the deputy director of ICE’s Enforcement and Removal operations and the agent in charge of Homeland Security Investigations in the area. O’Rourke told me that he and Escobar brought up two main concerns: first, they wanted to know what would happen to the agent who had submitted the apparently false affidavit, and second, they demanded clarity on whether González’s arrest was the consequence of a directive from the new Administration. Both Escobar and O’Rourke left the meeting feeling “reassured.” The officials, they said, acknowledged that the circumstances of González’s apprehension were “extraordinary.” “They said they hadn’t heard of this happening before,” Escobar told me afterward. “This wasn’t part of some larger scheme.” They promised Escobar and O’Rourke that there would be an investigation into both the operation itself and the questionable affidavit. (In a statement, a spokesman for Customs and Border Protection told me that the matter had been referred to the agency’s inspector general for review, and that both C.B.P. and ICE “take all allegations involving agent/officer conduct and integrity very seriously, and hold their personnel to the highest standards of professionalism and personal conduct.”)

The possibility that the agents who arrested Gonzalez were acting on their own initiative is, in some ways, an even more alarming prospect than if they were only following orders. Trump, with his law-and-order boosterism and rhetorical attacks on immigrants, has inspired fresh zeal at D.H.S. One border-patrol agent, from San Diego, recently told the Times, “For the first time in my nineteen years, I feel like I can do the job I was hired to do, the job they tell you you’ll be doing when you leave the academy.”

On Monday, I spoke with Fernando Garcia, the director of the Border Network for Human Rights, a community organization in El Paso, which works with Border Patrol and other law-enforcement agencies to reduce and prevent abuses. Garcia feared that the growing hostility to immigrants could derail the progress his group has made over the past several years. “There’s really a sense now that you can be apprehended at any time,” he said. González’s arrest showed that “you might not be protected even if you are the victim of a crime or abuse.”

Just before we spoke, news reports had surfaced with details about how D.H.S. was preparing for an unprecedented mass-deportation effort, which, among other things, frees up immigration authorities to deport virtually anyone whom they deem to be a threat to national security. I asked Garcia what he made of it. “Everyone is a target now,” he said. “We don’t need a memo to know that. It’s already happening. The perception, under Trump, is that every undocumented person is a criminal.” 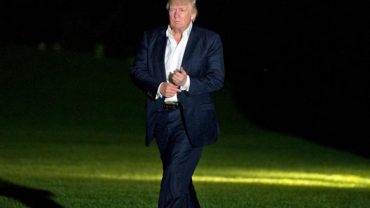