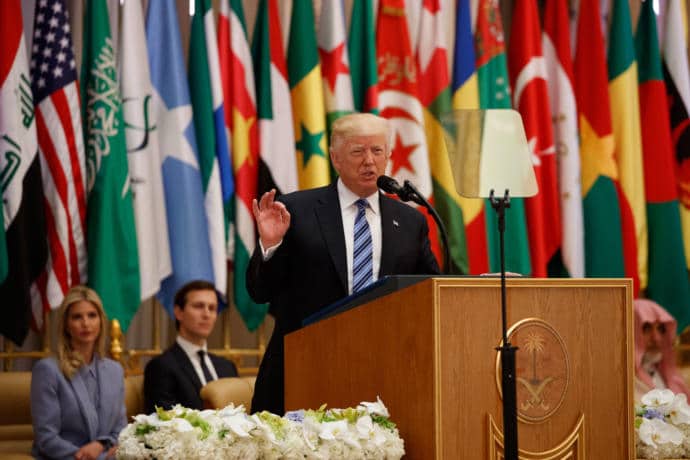 In Saudi Arabia, Donald Trump gave a speech that stood in stark contrast to his previous statements about Islam, but didn’t engender confidence.CreditPHOTOGRAPH BY EVAN VUCCI / AP

Six days after the 9/11 attacks, in 2001, President George W. Bush went to the Islamic Center in Washington to dampen fears of a clash of civilizations between the Islamic world and the West. “The face of terror is not the true face of Islam,” he said. “Islam is peace.” Three days later, at a joint session of Congress, Bush defined the challenge from Al Qaeda in political rather than religious or cultural terms. “This is the fight of all who believe in progress and pluralism, tolerance and freedom,” he told Congress. “This will not be an age of terror. This will be an age of liberty here and across the world.” A central theme of Bush’s Presidency was fostering democracy through nation-building.

President Barack Obama’s main speech to the Islamic world, in 2009, called for a “new beginning” between Muslim and Western nations, noting “civilization’s debt to Islam.” Declaring to Cairo University students that “we also know that military power alone is not going to solve the problems,” he, too, envisioned political and economic solutions to countering extremism.

“All people yearn for certain things: the ability to speak your mind and have a say in how you are governed; confidence in the rule of law and the equal administration of justice; government that is transparent and doesn’t steal from the people; the freedom to live as you choose,” Obama said. “Those are not just American ideas, they are human rights, and that is why we will support them everywhere.” He also outlined plans to spend billions in U.S. aid to build schools and hospitals, roads and businesses, and to help those displaced by conflicts in the Islamic world.

Donald Trump took a starkly different tack during the campaign. “I think Islam hates us,” Trump told Anderson Cooper, on CNN, fourteen months ago. He told both MSNBC and Fox News that he’d be willing to close mosques in the United States.  At the Presidential debate last October, in Las Vegas, he was particularly critical of Saudi Arabia. “These are people that push gays off buildings,” he said. “These are people that kill women and treat women horribly, and yet you take their money.” He continued the theme in his first days in office, with an executive order that banned travel from seven countries (later downgraded to six) with predominantly Muslim populations. It was ruled unlawful by U.S. courts, but the Trump Administration is still appealing the decision.

On Sunday, on his first trip abroad as President, Trump tried to hit the reset button in Saudi Arabia, the birthplace of Islam. He heralded Islam as “one of the world’s great faiths,” and his visit as the beginning of “a new chapter” between the United States and the Islamic world. In a palace of dazzling opulence, he spoke to dozens of leaders assembled by the Saudis from the Arab and Muslim world. In turn, the oil-rich kingdom, which is weathering its own political and military turmoil, treated him like royalty, with billboards across the Saudi capital covered with Trump’s face.

Trump notably did not use one of his favorite terms—“radical Islamic terrorism.” His national-security adviser, H. R. McMaster, has tried to get the President to avoid using the term, at least in public. During the campaign, Trump railed against Obama for not using it—and even charged that “anyone who cannot name our enemy is not fit to lead this country.” In Riyadh, Trump’s original speech called for him, instead, to talk about “Islamist extremism.” He veered off script, however, and talked about “confronting the crisis of Islamic extremism and the Islamists and Islamic terror of all kinds.” Many Muslims are sensitive to the implication that Islam and extremism are synonymous.

Trump’s strategy differed most strikingly from Bush’s and Obama’s in its largely military approach to extremism. One of the top objectives of his maiden foreign tour is to create a coalition of Arab and Muslim countries to tackle extremism, confront Iran, and foster peace between Israel and the Palestinians. The coalition has been informally dubbed an “Arab NATO.”

The President seems to have largely abandoned notions of promoting political openings or addressing economic grievances that have fuelled so much of the dissent and militancy, especially among Arab youth. Even oil-rich Saudi Arabia has high youth unemployment, estimated to exceed thirty per cent. The kingdom has produced thousands of jihadis who have joined both ISIS and Al Qaeda.

“We are not here to lecture,” Trump told the Muslim leaders, who were seated on throne-like leather chairs under enormous crystal chandeliers. “We are not here to tell other people how to live, what to do, who to be, or how to worship. Instead, we are here to offer partnership—based on shared interests and values—to pursue a better future for us all.”

Trump framed his counterterrorism policy in Let’s-Make-a-Deal terms: Washington will sell weaponry to the Arabs, which will in turn create defense-industry jobs in the United States. In his speech, the President digressed from the main theme to claim that his Administration has created almost a million new jobs—adding that the kingdom’s pledge to invest billions more in the United States would create thousands more new jobs.

As a candidate, Trump repeatedly complained that the United States got very little from its relationship with the kingdom. “Tell Saudi Arabia and others that we want (demand!) free oil for the next ten years or we will not protect their private Boeing 747s. Pay up!” Trump tweeted, in 2014.

That year, he also tweeted, “I just want to know how much is Saudi Arabia and others who we are helping willing to pay for our saving from total extinction. Pay up now!” In 2015, he tweeted that Saudi Arabia “must pay dearly! NO FREEBIES.”

In Riyadh, however, he bragged about the low prices his Administration was offering the Saudis. “We will be sure to help our Saudi friends to get a good deal from our great American defense companies.” His son-in-law, Jared Kushner, reportedly intervened personally with Lockheed to negotiate a better deal for the Saudis.

In one of his more astonishing comments, the President expressed optimism about the future of the Middle East, despite wars in Libya, Yemen, Iraq, and Syria that have killed hundreds of thousands; the greatest humanitarian and refugee crises since the Second World War; and the return of authoritarian rule—disasters which have dashed the hopes sparked by the Arab Spring.

“The potential of this region has never been greater,” Trump told the Muslim leaders assembled in Riyadh. Maybe it was the brilliant glare of the chandeliers that blinded his vision.