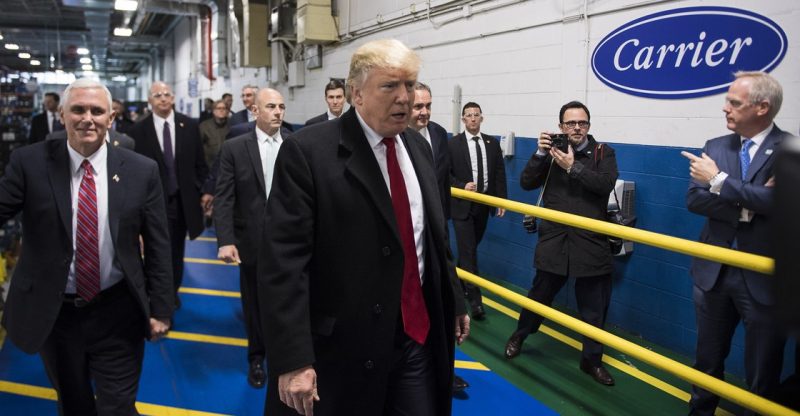 On February 10, 2016, the Carrier Corporation, an H.V.A.C. company founded in 1915, announced that it would be closing plants in Indianapolis and Huntington, Indiana, and moving to Monterrey, Mexico. Months later, at the first Presidential debate with Hillary Clinton, Donald Trump brought up the closings. “We have to stop our companies from leaving the United States and, with it, firing all of their people,” he said. “All you have to do is take a look at Carrier air-conditioning in Indianapolis. They left—fired fourteen hundred people. They’re going to Mexico.” Shortly after the election, Trump and Mike Pence, who was then the governor of Indiana, announced a headline-grabbing deal with Carrier that was said to keep about eight hundred jobs in the U.S. “So many people in that other—the big, beautiful plant behind us, which will be even more beautiful in about seven months from now, they’re so happy,” Trump said at a celebratory press conference.

In May of this year, Carrier announced its time line for eliminating what will ultimately be six hundred and thirty-two Indianapolis-based jobs. The first round of layoffs began on Thursday, with the departure of three hundred and thirty-eight employees. Watching with dismay was Brenda Darlene Battle, a fifty-five-year-old Indianapolis native who’d been working at Carrier for twenty-five years, most recently as a fabrication technician, or fab tech, before she decided to quit this week*. She helped run the automatic press that makes steel doors, among other parts, for A90 furnaces. When the final furnace door was completed on the first day of mass layoffs, employees working the assembly line—some for the last time—autographed it. On Friday, shortly before finalizing paperwork related to her departure, Battle spoke by phone about the company that employed her for a quarter century, President Trump, and her future. Her account has been edited and condensed.

When the final furnace door was completed on the day of the layoffs, employees working the assembly line—some for the last time—autographed it.

“I’ve been working at Carrier since I was thirty. I didn’t go to high school or college. My parents were union people. My dad was an oiler for G.M. I did a lot of babysitting before I joined the assembly line at Carrier. When I started, in 1992, they were threatening to move to Mexico, and any time they got pissed off, that was their old threat: ‘We’re gonna move to Mexico, anyway!’ That’s what management would say.

“It used to be a fun place to work; I didn’t mind going. Then they started making changes that only benefit them: robots, cutting jobs. Just yesterday, they were talking about cutting a three-man blower-shelf crew—they deal with the forms that hold the blower on one side and the heating element on the other—down to two. But two people can’t do that job. My job running the press, it was a two-man job, but then they brought a robot in. The doors go down the conveyor belt now, and the robot stacks them in the cart.

“It seemed like as soon as they first put the robots in, they made the announcement about layoffs a month later. I’ll never forget that day. They told everyone to meet them at the front of the plant. Then, when they got up there, that’s when they told us they were really moving to Mexico. It just went downhill after that. We knew change was coming, we just didn’t know what. But it went to hell in a gasoline-soaked handbasket in February of last year. They could have been a lot more professional about making the announcement.

“This is peak season for the industry right now. We work six or seven days a week. So those people at work is basically your family. Of the three hundred and thirty-eight who left yesterday, I knew over a hundred of them, because I had worked days and nights over the years. I knew a lot of people. My fiancé worked security at Carrier in the late nineties, and he had just died three or four days before the announcement in February of last year. So I was grieving. I was stressed out, on bereavement. When he passed, I moved home to live with my parents. Then, last December, my mom passed. So it’s me and my dad and my sister and her children, in one house.

“Trump came in there to the factory last December and blew smoke up our asses. He wasn’t gonna save those jobs. And, if that’s the case, he would have saved us and Rexnord, a company around the corner from us that makes parts.

“We had a mix of Trump supporters and Clinton supporters at the factory, I’d say. The ones that really supported him are quiet right now. Some of them got let go yesterday, too.

“We talked about Trump on the job, after the election. You could always tell who the Trump supporters were because they never participated in the conversation. It was about even, blacks and whites, for Trump. Also, some of them wore the hats. Not anymore, though.

“Personally, I think the President is a ‘rubber room’ politician. He’s crazy. He needs a straitjacket. He’s in there for his self. He’s not in there to help America keep jobs. Because if he was we wouldn’t be in the predicament that we’re in every day. He keeps howling, ‘Make America great.’ But he can’t make America great if all the jobs are leaving the States and going to Mexico. People can’t support their families.

“He has a thing against women, too. No woman is safe, to me. He wants to tell them what to do with their bodies. Women have been working for years, but he doesn’t want us to have insurance. Everybody came from a mother. Even him. I voted for Hillary. I think most of the people I worked with at Carrier voted for someone. The Trump people really thought he was gonna save our jobs.

“I think the C.E.O. of Carrier and Trump was in bed together the whole time. That day Trump came to Carrier, those two were too chummy. The way they sniggled and giggled. That sneaky kind of shit-eating grin.

“They sat us in the room based on seniority and job classification. On the aisle with me there was ninety-five years of seniority, just with three people: myself, my girlfriend, and this one guy who has been there forty-five or forty-six years. It was an experience, because not only was the media there, there were people from the E.P.A. We met a lot of interesting people that had nothing to do with Trump. I didn’t need to shake his hand.

“I’m going to be taking it very easy for a few months and do some of the things that my dad wants to do. He’s seventy-seven years old, but he thinks Trump blew smoke up our asses, too. We’d like to travel and see family in Cincinnati, Kentucky, Tennessee. I’ve got a little money saved. I’m in no hurry to look for another job quite yet.”

*A previous version of this article stated that Battle had been laid off. She decided to leave her job the week that the layoffs took place.